It’s your giveaway post! Get a free bonus entry and check out Murder in The Snow by Verity Bright 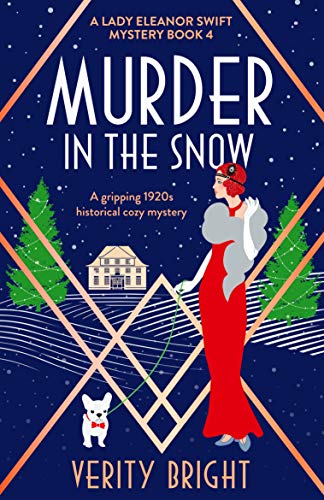 The perfect English winter has hot chocolate, woolly mittens, a sprinkling of snow… and a murder? Thank goodness Lady Swift is on the scene!

Winter, 1920. Amateur sleuth Lady Eleanor Swift is feeling festive. She is playing host to the entire village at Henley Hall for gifts, games and gingerbread. She’s also purchased perfect presents for each of her household – not forgetting the biggest bone in the butcher’s shop for her partner in crime, Gladstone the bulldog.

As snowflakes fall, Eleanor is cheering on contestants in the traditional fun run in the grounds of the Hall. But tragedy strikes when one of the runners drops dead at the finish line. Dashing Detective Seldon is convinced it’s just a heart attack, but Eleanor isn’t so sure. When she finds a rather distinctive key where the man fell, Eleanor knows she’ll never rest until she finds out the truth about what happened in her own home.

Next the vicar is taken ill with what looks like poison and Eleanor starts to wonder if the two cases are linked. When someone tries to frame her by planting poisoned berries in her own kitchen, she knows speed is of the essence. But the entire village was at Henley Hall for the festivities and Eleanor has enough suspects to stuff a town full of turkeys. Can she nail the true killer and clear her name before the snow disappears?

The perfect book to curl up with on a cold winter’s night! An absolute treat for fans of Agatha Christie, TE Kinsey and Lee Strauss.

Go to Giveaway Central to enter and to say thank you here is a bonus entry word: snow