You and your partner are both out of work when you stumble across a truck load of money and drugs. With no witnesses, it’s the answer to your prayers. Or is it? Caribbean Layoff by C.M. Lance 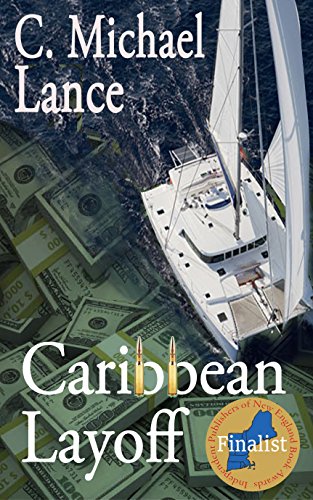 The cartel’s senior enforcer decides he is owed a retirement plan. The easiest way is to steal millions in cash and drugs from the cartel—and leave no witnesses—while he escapes to Canada. Unfortunately, his own years of drug use ruin his plans.

You and your wife are both out of work when you stumble across a truck load of money and drugs. With no witnesses, it’s the answer to your prayers. But with it comes new problems. Where do you put it that the government or the cartel won’t take it from you, leaving you worse off? Steve and Jen work out a plan to get it to a Caribbean tax haven. But the head of the cartel makes it his organization’s top priority to find who took it, get it back, and kill the thieves. A lesson must be taught.

The cartel has resources even the government doesn’t—they even have resources in the government—and aren’t constrained by laws. Soon the cartel is one step behind them. Steve and Jen are going to have to fight back. Steve’s Green Beret years are far behind him but it’s the only thing he’s got.

If you’re into fast paced action-adventure thrillers that are hard to put down or you didn’t like the ending of No Country for Old Men, or a A Simple Plan, pick up a copy of Caribbean Layoff.

What Readers are saying:

“A thrilling book. It’s full of twists and turns.”

“The suspense kept me from putting the book down.”

“As the story progressed I couldn’t put the book down. Good read!”

“The characters and story grabbed me right at the beginning and didn’t let go. Seriously. I picked up the book at 2 PM, stopped for a wine break, managed a bowl of cereal for dinner and read until I’d finished it. Haven’t done that in years.”

“The characters are well-developed and, most importantly to me, there are no loose ends and crazy made-up twists needed to make it hang together cleanly. I want to see the movie.”

“Scintillating action from cover to cover. The plot is entirely plausible that the couple chooses to keep the money, but, in the process, faces a surprisingly ferocious cartel hell-bent on getting the money back.”