A young woman from Kiynan must overcome her fears to unlock the long-forgotten magic of the fallen House Calm in… The Conquest of Kiynan by Eric P. Caillibot 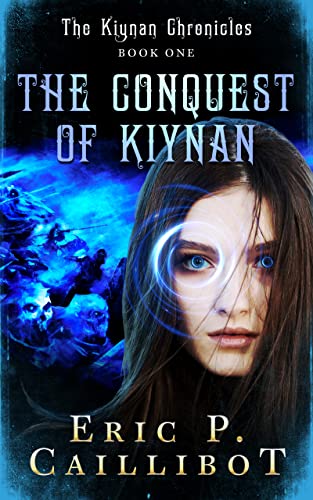 – Learn More
Text-to-Speech and Lending: Enabled
Enjoy Eric P. Caillibot Books? Tell us why and WIN a chance for a FREE ebook!
Here’s the set-up:

Masc Blackheart, a bloodthirsty warlord, invades Kiynan. The only person standing in his way is Hendrik Stoneworth, a young naïve King. Will he be shrewd enough to repel the attack and save his kingdom?

Meanwhile Daimin the Mauve, an ancient Conjurer, escapes from his imprisonment in the spirit world. He raises an army with the intention of taking revenge and conquering the people of Ornland.

In a desperate bid to defeat their enemy, the magic Houses of Ornland seek help from their alienated kin on Kiynan.

But will that be enough? What schemes does the barbaric warlord have up his sleeve?

Emerge a savior, Kayla Freeland. A young woman from Kiynan who must overcome her losses and fear to unlock the long-forgotten magic of the fallen House Calm.

As she learns to channel her emotions into this newfound power, will she be able to rally the young king, the feuding magicians of Ornland, and all the people of Kiynan to fight back and oppose the merciless invaders?

[…] The book follows multiple point-of-view characters through an unlikely thread that weaves them together in a patchwork of royalty, loyalty, war, and magic. […] The Conquest of Kiynan is an incredibly ambitious book […] There is a deep level of trust we must put into an author when we commit to their world, and Eric P. Caillibot delivers as the pages steadily turn. The strength of this first installment is in its character development, particularly in the nuanced identity features Caillibot gives to each one, even small ancillary cast members. […] The world-building is well done although the descriptive narrative tends to run over into multi-paragraphs but this is forgivable in the context of a robust plot and intense battle scenes. That said, where most books start strong and then lag through the middle, I found that Caillibot’s storytelling grew stronger as the book progressed. Witnessing the maturing of an author in their own novel is a rare and beautiful experience, and leads me to believe that there will be much more to come from this one in particular.