#1 in Galactic Empire
#1 in Military Sci-Fi
#1 Cyber-punk
#1 in Space Opera!
The Messenger: A Military Scifi Epic by J.N. Chaney and Terry Maggert

The Messenger: A Mecha Scifi Epic 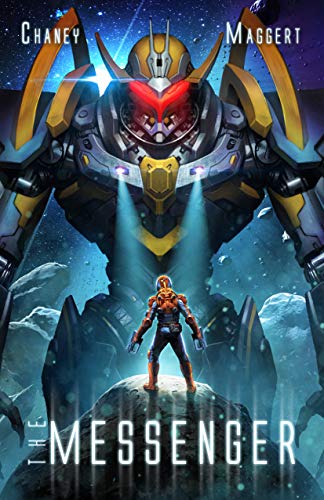 – Learn More
Text-to-Speech and Lending: Enabled
Available on Audible
Enjoy J.N. Chaney, Terry Maggert Books? Tell us why and WIN a chance for a FREE ebook!
Here’s the set-up:

Dash never asked to be a mech pilot, but fate has other plans.

On the run and out of chances, he guides his ship and crew into the heart of a relic older than the galaxy itself—and finds himself on the edge of an eternal war he never knew existed.

The relic is a mech, lost to history and forgotten by all who remain. Built by an ancient race to be the ultimate weapon, the machine is capable of unspeakable destruction, and its discovery could unhinge the balance of power throughout known space.

Worse still, the A.I. inside the machine speaks of an ancient evil that will soon arrive–a race whose power far exceeds anything humanity has ever witnessed.

Only the Messenger can stand against them, the A.I. tells its new pilot. Only you can do what must be done.