Packed full of paranormal intensity with a classic good versus evil conflict… When Gods Clash: The Heavens by Rob James

WHEN GODS CLASH: THE HEAVENS 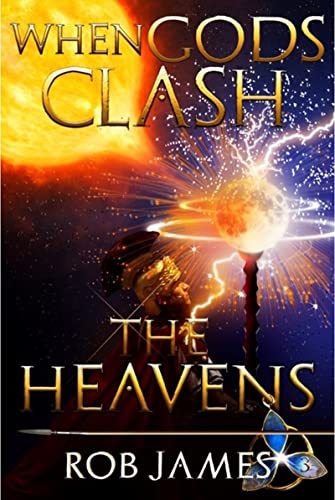 Kindle Price: $3.99
Supports Us with Commissions Earned
FREE with

– Learn More
Text-to-Speech and Lending: Enabled
Here’s the set-up:
With enormous power granted by the universe and loyal warriors at his side, Angus MacDonald rages back against all odds.

Vicious entities storm toward Earth and render traditional methods of warfare useless. The conflicts escalate. Angus must improvise while the euphoria of victory and the heartbreaking loss of friends tear at his soul. Voices at Culloden had warned him of coming challenges, but not this!
The Olympian gods of mythology, Poseidon, and others join him to protect their realm, and Agnus’s cause gathers support. Just in time as the stakes rise when new deities arrive on Earth’s doorstep.
Threats increase and hope fails when the ultimate challenger arrives, the scourge of civilizations. Humankind’s fate hangs on the feud between Angus and the newcomer. It glares fury into his eyes, and his world’s survival comes down to a battle between two.

Packed full of paranormal intensity with a classic good versus evil conflict, The Heavens brings a stunning conclusion to the powerful saga, When Gods Clash.