It’s Giveaway time! Get a free bonus entry into our weekly raffle and check out Daughter of The Shipwreck by Lora Davies

Daughter of the Shipwreck: A powerful and emotional historical fiction page-turner 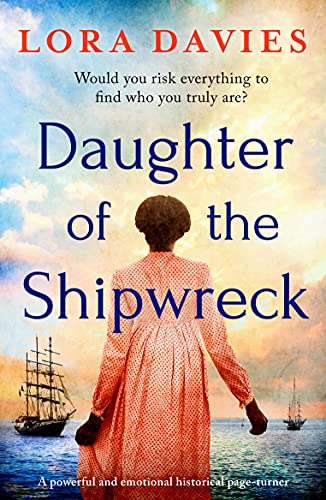 He kicked and struggled as his sister was carried out through the shallow water to one of the boats. The distance between them seemed to stretch out and out. There was nothing he could do. He cried out to her, his voice hoarse with tears, ‘I will find you! I promise!’

London, 1820: Nineteen-year-old orphan Mercy lives with her guardian and is working on the campaign to abolish slavery. On the other side of the city, a young sailor named Mat is scouring London in search of the men who kidnapped his sister many years before.

When he crosses paths with Mercy, he realises the little girl he had given up for dead is alive. Although he is overjoyed, this discovery destroys everything Mercy thought was true about the family she has lost. She’s been lied to.

Then the men Mat has been hunting are found dead, one after the other. With Mat implicated in their murders, it becomes clear someone is going to extraordinary lengths to keep the newly reunited siblings apart.

It is now up to Mercy to uncover the true culprit – before she loses her brother again forever. Even if it means uncovering a dark secret from their past. A secret someone will kill to protect.

An utterly gripping and powerful novel about family, secrets, identity, and risking everything for the ones you love. If you liked The Foundling, The Miniaturist or Amy Snow, you will love Daughter of the Shipwreck.

Go to Giveaway Central to enter and to say thank you here is a bonus entry word: daughter