This no-holds-barred action/adventure thriller will send you to the edge of your seat and leave you glued to the pages long into the night! The Tears of Odessa by R.B. Schow 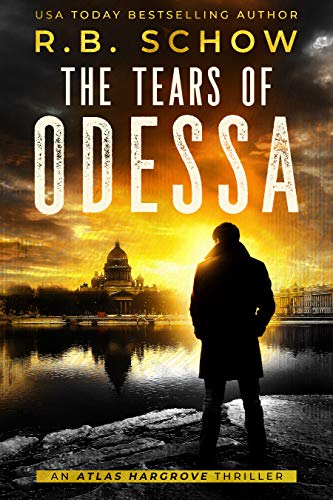 BIG SEMI-ANNUAL SALE!! Both The Tears of Odessa (reg. $4.99) and The Beasts of Juarez (reg $5.99) are on sale for a very limited time only! Grab your heavily discounted copies before 1/14/22 and find out why Atlas Hargrove and the gang are taking the thriller market by storm!

…in a country this killer barely understands.

Atlas Hargrove is officially on the hunt.

Former SWAT commander, Atlas Hargrove, just earned himself back-to-back life sentences in a California supermax prison. One emotionally-charged moment cost him his wife, his family, his life. All is not lost, though. On the fringes of polite society, financiers with leverage and influence are in constant search of a brute like Atlas, an unlikely asset with a perfect alibi and the skill set needed to stir up hell in the middle of hell itself.

Halfway across the globe, a kidnapped child is being moved from one country to the next. With time as his enemy and the rule of law behind him, Atlas will rely on a dodgy group of mercenaries and the instincts of his past to find the girl, kill those who took her, and stamp in the minds of monsters a single message: if you meet Atlas Hargrove, your life is likely over.

Fast-paced and packing one hell of a punch, this no-holds-barred action/adventure thriller will send you to the edge of your seat and leave you glued to the pages long into the night!

If you like Jack Carr, Mark Greaney, Lee Child, Vince Flynn, and Blake Banner, you’re going to love Atlas Hargrove in the bold new series-starter early readers have calling, “A resurgence of both power and heart in the thriller genre,” and “2020’s biggest surprise!”

If you’re ready for a night of edge-of-your-seat, unputdownable fiction, fire up your kindle, grab some caffeine, and prepare yourself for a wild night with the pride and joy of NorCal State Prison: the enigmatic, unpredictable Atlas Hargrove.

NOTE: This book contains the kind of brutal violence, strong language, and sexual content one might expect in a R-rated movie. The Beasts of Juarez and The Betrayal of Prague are now available with The Devil in Cologne arriving in April, 2022!