Gianna Mosley has it all. As a top influencer engaged to a baseball star, Sunny Banks, what more could she want? A faithful fiancé? All Cowboy and Pure Country by Rhonda Lee Carver 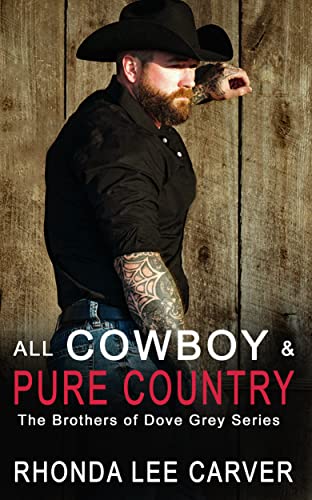 Gianna Mosley has it all. As a top influencer engaged to a baseball star, Sunny Banks, what more could she want?

Her assistant announces on a radio talk show that she and Sunny are having an affair and they’re in love, and Gianna’s world comes crashing down. The media has a field day with the scandal and fans blame her. Fast forward six months, she’s moved on from Sunny, but when she reads that he’s engaged to her ex-assistant, Gianna can’t help but feel a slap in her face.

Carter Dawson is celebrating his birthday over a couple of drinks and chicken wings at the local honky-tonk when he thinks it’d be funny to text his old friend and ask her to marry him. After all, when they were kids, they’d made a pact that if they were still single at thirty, they’d marry each other. When he wakes up the next morning with a fiancée, the joke is no longer funny. His name is plastered all over social media as the new Mr. Mosley. What the hell?

She went about things a bit cockeyed. Now she’s fake engaged and needs to plan a staged break-up. However, she and Carter both warm up to the idea that a pretend relationship is more fun than the reality of being alone.

Love ain’t so bad either.

Both have some dragons to slay. Gianna hasn’t trusted anyone since her ex cheated. And Carter can’t live in the shadow of her past relationship. Will love triumph? Or are they doomed?