His Mission: Five days to destroy the enemy in the Caribbean before a catastrophic weapon is unleashed—but all he can think about is the woman he left behind…. Caribbean Counterstrike by Edward Hochsmann 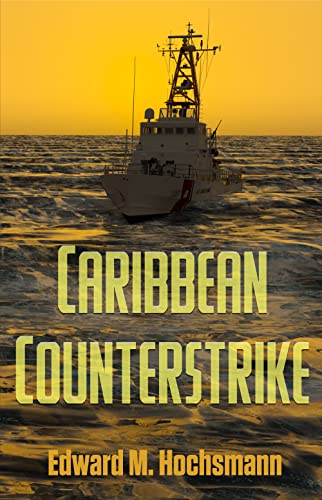 Mission: Five days to destroy the enemy in the Caribbean before a catastrophic weapon is unleashed—but all he can think about is the woman he left behind…

The deadliest nerve gas ever made has fallen into the hands of a murderous Caribbean drug cult. The criminal 252 Syndicate has the gas in a secret lab on an oil rig servicing ship, but the ship has been taken for ransom by the Salinas Cartel in a violent drug war. The U.S. can’t use airstrikes and calls on Coast Guard Officer Ben Wyporek to lead his crew through a risky covert raid on the Salinas cult’s fortified island base. He accepts the assignment, but remembers a previous lethal encounter with the 252s and struggles to say goodbye to the love of his life, Victoria Carpenter.

Ben and his crew aboard the stealth-equipped Cutter Kauai must sneak into the harbor and tow the ship away. But if Kauai is detected and defeated, death by gas or at the hands of vicious adversaries will follow. Now, every decision Ben makes will determine the fate of his entire crew—and the chances of reuniting with Victoria.

This second book of the series builds on the friendships and teamwork of Kauai‘s crew, this time in the face of several challenging missions and one potentially lethal encounter. It is a worthy sequel to Dagger Quest that sea adventure and military thriller fans will enjoy.

This book is a military thriller adaptation of a SciFi novel previously published as Engage at Dawn: Seize and Destroy by Edward Hochsmann.

From the Self-Publishing Review:

“The USCG Kauai and its crew are back for another fast-paced thriller in Caribbean Counterstrike by Edward M. Hochsmann, the second installment of his Cutter Kauai Sea Adventures series.

“Fresh off their lethal drug ring battle a few months earlier, the cutter has been quietly promoted to perform sensitive missions under the Director of National Intelligence, thanks to its elite crew. Their latest assignment brings them into even more dangerous waters, where they hunt down a murderous drug cartel boasting biochemical weapons, along with an international crime syndicate that knows how to hold a grudge. The rugged crew returns for more deadly sea chases and shootouts, though there is an added layer of cloak-and-dagger espionage in this latest installment.

“Hochsmann’s meticulous prose continues to hum with lived experience and authenticity, while the relationships onboard the Kauai only deepen in complexity. Despite the patriotic nature of this swashbuckling series, there are also moments of brutal honesty about the challenges and issues within the US military – from unwieldy chains of command to the expendable nature of dedicated servicemen. The author’s ability to craft a blockbuster story while weaving in critical themes of trust, honor, and independence is a testament to his nuanced perspective on the complex subject matter.”