It’s Giveaway time! Get a free bonus entry into our weekly raffle and check out The Bishop’s Pawn: A Novel by Steve Berry 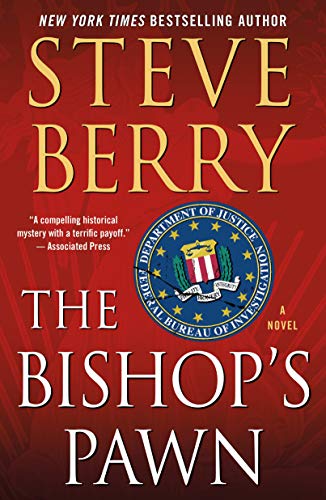 4.5 stars – 1,483 reviews
Kindle Price: $2.99
Supports Us with Commissions Earned
Text-to-Speech: Enabled
Available on Audible
Enjoy Steve Berry Books? Tell us why and WIN a chance for a FREE ebook!
Here’s the set-up:

History notes that the ugly feud between J. Edgar Hoover and Martin Luther King, Jr., marked by years of illegal surveillance and the accumulation of secret files, ended on April 4, 1968 when King was assassinated by James Earl Ray. But that may not have been the case.

It all turns on an incident from eighteen years ago, when Malone, as a young Navy lawyer, is trying hard not to live up to his burgeoning reputation as a maverick. When Stephanie Nelle, a high-level Justice Department lawyer, enlists him to help with an investigation, he jumps at the opportunity. But he soon discovers that two opposing forces—the Justice Department and the FBI—are at war over a rare coin and a cadre of secret files containing explosive revelations about the King assassination, information that could ruin innocent lives and threaten the legacy of the civil rights movement’s greatest martyr.

Malone’s decision to see it through to the end —— from the raucous bars of Mexico, to the clear waters of the Dry Tortugas, and ultimately into the halls of power within Washington D.C. itself —— not only changes his own life, but the course of history.

Steve Berry always mines the lost riches of history —— in The Bishop’s Pawn he imagines a gripping, provocative thriller about an American icon.

Go to Giveaway Central to enter and to say thank you here is a bonus entry word: pawn