Can Emily survive the most terrible epidemic in the history with her life – and heart – intact? When the World Stood Still: Absolutely heartbreaking wartime historical fiction by Kate Eastham 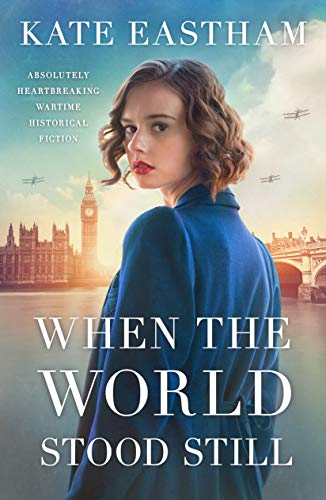 The nurses were putting in twelve-hour shifts now, day and night. Emily felt broken inside, dried out, not even capable of tears. They were short-staffed after a softly spoken Irish nurse had died from the unstoppable disease and two more had fallen ill. And more patients were coming in every hour, though the hospital beds were already full…

Wartime London. Twenty-year-old Emily Burdon has been training as a nurse, learning on the job as she tends to patients from the crowded poorhouses that ring the hospital as well as wounded soldiers. She pours her heart into her nursing while she waits for happier times – peace in Europe and the return of her childhood sweetheart Lewis from battle.

But when the deadly Spanish Flu arrives in London on the heels of the war, Emily’s faith and courage are put to the test. All around her men and women in the prime of their lives are wasting away, and until a cure is found there is nothing for Emily and her colleagues to do.

But then Lewis admits to a devastating betrayal, just as a new doctor is transferred to head up Emily’s ward. From the distant land of Prince Edward Island in Canada, Dr James Cantor is the first of a generations-old farming family to have left the island, and wartime London feels a long way away from the rugged beauty of his homeland. But despite their differences, he and Emily find common ground in their passion for helping patients. But with life forever changed around her and Lewis’ future hanging by a thread, can Emily survive the most terrible epidemic in the history with her life – and heart – intact?