A covert black-ops military operation is starting in Idaho and Montana…. The Patriot Oath by Lloyd Lofthouse 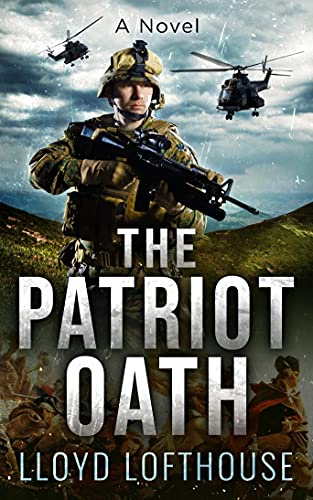 – Learn More
Text-to-Speech and Lending: Enabled
Enjoy Lloyd Lofthouse Books? Tell us why and WIN a chance for a FREE ebook!
Here’s the set-up:

After 24 years, Special Forces legend Josh Kavanagh has retired from the military. But now that he’s home, he’s finding that everyone has a different understanding of his motivations, and realizes there are some wounds no amount of time can heal.

Josh’s traumatized sister Suki, thinks her big brother is a hero and has come home to punish her rapist, the youngest son of a ruthless, crooked billionaire who lives to get revenge on anyone he sees as a threat to his family, wealth, and power.

Josh’s childhood sweetheart, Rachel, hopes he’s returning for her—the fierce girl he left behind when he joined the military. But Rachel doesn’t know about Mia, the woman in France …

And Josh isn’t coming home alone. The Oath Group, an elite force of private military contractors, is already in Montana waiting for their commander to arrive.

The DOD and CIA don’t want President Trump to know they hired Josh’s Oath Group to examine dangerous white supremacist militias that are threatening the U.S. Constitution. That covert black-ops military operation is starting in Idaho and Montana. Josh and his teams have to get the job done while preserving their anonymity—and their lives.