A savory selection of ‘Whodunnits’ by some of your favorite award-winning and USA Today bestselling authors: Murder Is Scheduled For Monday (Diehard Dames Amateur Detective Series Book 2) 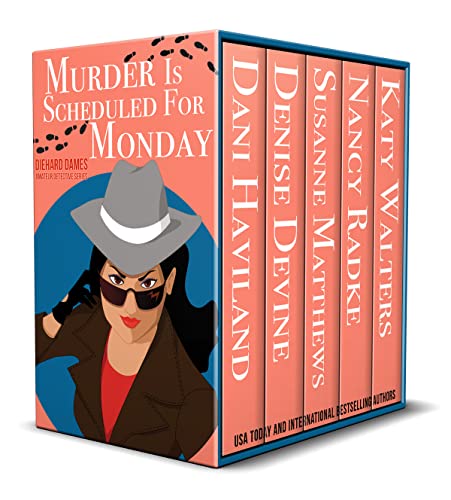 Step up and enjoy our delectable feast of cozy mysteries featuring Dynamic Diehard Dames. Our stubborn and determined female amateur detectives will prove they aren’t the weaker sex – regardless of their age or physical abilities – especially when it comes to cleverness and brain power. Come along as our ladies solve (at least) five different dire dilemmas. Will their ‘helpers’ and the professional detectives get in the way of solving the mysteries? Read on and find out!

MURDER IS SCHEDULED FOR MONDAY, a savory selection of ‘Whodunnits’ by some of your favorite award-winning and USA Today Bestselling Authors, perfect to enjoy any day of the week.

NEW! Dani Haviland: Never a Dull Murder (An Arlie Undercover Cozy Mystery)
How do you solve a murder when there is no weapon, witnesses or DNA? The case gets even more challenging for the Anchorage detective when he gets ‘help’ from the victim’s friends…and an adorable bear cub!

Winifred’s secret lover was safe in Witness Protection until someone found him, trashed his award-winning garden, and ended his life. Will amateurs solve the case or get in the way?

NEW! Denise Devine: Shot in the Dark (Book 1 – Girl Friday Cozy Mystery Series)
Tall, dark, and classically handsome, the private detective’s ego is bigger than his brain. Will his Girl Friday step up and solve his case – and get him out of the county jail?

Meet Stella James: She’s out-of-work, dead broke, and out of options until she snags a job as an office go-fer with her stepbrother, Randy, a private investigator. He’s tall, dark, and classically handsome, but his ego is bigger than his brain and it soon gets him a free vacation at the county jail when one of his female clients ends up murdered – in his bed. Stella is faced with a choice – find the real killer or risk losing not only her new job but her boss as well.

Susanne Matthews: Prove It!
High school sports can be more dangerous than you think!

When Liam ignores the threats to stop running, he’s left for dead by a hit and run driver. When his friend investigates, he goes missing. Now it’s up to Hannah to find the missing boy and whoever is responsible for his disappearance before they strike again.

Sometimes help comes with curves and other times with four paws. Will the new sheriff be smart enough to accept their assistance in searching for the farmer’s eight-year-old son?

NEW! Katy Walters: A Duke’s Binding Love
The Chief Librarian has been murdered. Could the seventh Duke of Pemberton convince his fellows that a young woman was the best replacement? A Regency Time Travel story.

His Grace, Augustus William George Ashbury, the seventh Duke of Pemberton, is horrified when informed of the brutal murder of his Chief Librarian. Not only has he lost a friend but also the only man he knew who had the knowledge and skill to renovate the ancient books in the Duke’s library. Augustus has his staff, family, and friends search high and low for an able substitute but to no avail.
But then his steward discovers a possible replacement. However, there are three stumbling blocks. The first is the replacement of a young woman. Would the male members tolerate a female assistant? The second setback is the young lady lives two centuries in the future. Gus has the means to overcome the first two issues, but the last obstacle is the most difficult; how would the woman react?