“A wonderfully convincing snapshot of post-Roman Britain, dark and bloody and visceral. Highly recommended”… Land of Fire (The Last of the Romans Book 3) by Derek Birks

Land of Fire (The Last of the Romans Book 3) 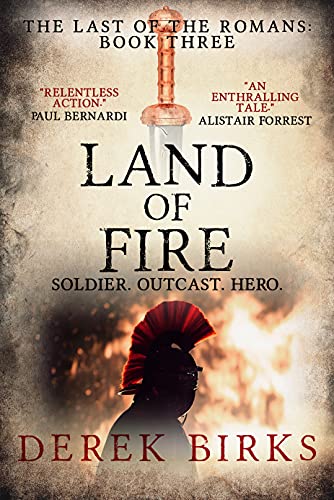 – Learn More
Text-to-Speech and Lending: Enabled
Available on Audible
Enjoy Derek Birks Books? Tell us why and WIN a chance for a FREE ebook!
Here’s the set-up:

After a brutal winter struggle against the High King Vortigern, outcast imperial officer Ambrosius Aurelianus has led his weary followers to south-west Britannia in search of his mother’s kinfolk. But Vortigern, thirsting for revenge is already forging a dangerous alliance against him.

Taking refuge in a ruined Roman fort near the decaying town of Vindocladia, Ambrosius finds an ally in Lurotriga, the widowed queen of the Durotriges. Though still sworn to his Saxon lady Inga, he is soon beguiled by the British noblewoman.

Between Inga and her new rival there can be no compromise and their enmity threatens to cause a rift between the Britons and Saxons of Ambrosius’ company.

If Vortigern attacks before the fort is repaired Ambrosius fears the outcome. He must find allies fast but, in a land of squabbling rival tribes the Roman encounters more enemies than friends. A treaty with neighbouring Dumnonia offers Ambrosius some hope, but commits him to defend the south coast against Scotti raiders. Ambrosius’ forces are stretched perilously thin putting the lives of Lurotriga and others at risk.

As Ambrosius prepares to pursue Vortigern for a final reckoning, his quest to discover his mother’s kin suddenly delivers a startling revelation, but will it help him to defeat the High King?

Heavily outnumbered in the thick forests and steep valleys of Vortigern’s homeland, Ambrosius must rely upon the fighting spirit of his small force of bucellarii and raw recruits. But sometimes courage alone is not enough.

‘In Land of Fire, Birks creates a world of violence and intrigue that will leave you breathless. Set in the period after the Romans have left Britain for good, it captures the desperate struggles between rival warlords seeking to install themselves as overlord, set against the ever growing threat of Saxon incursion from the east. For page after page, the relentless action sweeps you through the landscape from brutal skirmish to gory battle. Intense!’ Paul Bernardi, author of The Huscarl Chronicles