“Dark and punchy. An enigmatic hero takes on the dangerous streets of London.” Shaun Baines, author of Pallbearer Recommends Enough is Enough: A James Marshal Thriller by Thomas Waugh 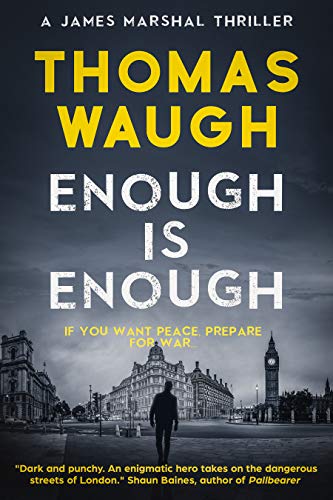 “Dark and punchy. An enigmatic hero takes on the dangerous streets of London.” Shaun Baines, author of Pallbearer

Two Albanians, sitting in a car, are selling cocaine outside a school again.

Enough is enough, James Marshal, an ex-Para, tells himself as he observes the drug dealers.

Marshal assaults the Albanians. But it’s just the start, rather than the end, of things.

The ruthless gang, led by Luka Rugova and Viktor Baruti, demand retribution. The blood debt must be paid.

To gain intelligence on the criminal organisation Marshal approaches the fixer, Oliver Porter.

In return for providing Marshal with information, Porter asks a favour of his former associate.

Marshal must drive the fixer’s niece around for a couple of days.

But a lot can happen in a couple of days.

When Marshal returns to London, the Albanians find him. The blood debt still needs to be paid.

Marshal must end what he started, one way or another.