Everyone fears the hunter in the shadows – even the monsters… Jami Gray’s dark urban fantasy with a thrilling edge: Shadow’s Edge 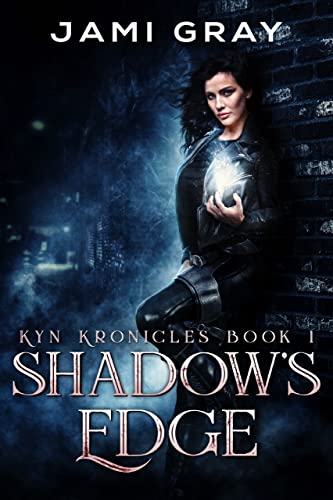 4.4 stars – 201 reviews
Kindle Price: 99 cents
Everyday Price:
Supports Us with Commissions Earned
Text-to-Speech and Lending: Enabled
Enjoy Jami Gray Books? Tell us why and WIN a chance for a FREE ebook!
Here’s the set-up:
Raine’s spent a lifetime hunting monsters, but can she stop her prey from exposing the supernatural community one bloody corpse at a time?

Everyone fears the hunter in the shadows – even the monsters…

Raine McCord, forged in the brutal maelstrom of magic and science, is an elite hunter at home hunting monsters through the murky shadows of the supernatural world of the Kyn. Not an easy task when you’re trying to keep the humans ignorant of the existence of creatures typically confined to campfire tales. And gets worse when a series of disappearances and deaths in the Kyn community suggests someone wants to rip the thin veil of secrecy aside and expose the horror lurking behind the curtain.

To even the odds, Raine is forced to partner with another hunter, the sexy and tantalizing Witch-Fey, Gavin Durand. Their partnership proves to be as challenging and dangerous as the prey they hunt. Especially when the trail leads back to the foundation that warped Raine’s magic as a child and threatens to resurrect the nightmares of her past.

Determine to stop the threat to the Kyn, Raine and Gavin stalk their prey through a maze of lies, murder, and greed, but will the price they pay be too high?

If you like fast-paced, suspense-filled, dark urban fantasy with a thrilling edge, then grab your copy of Jami Gray’s riveting SHADOW’S EDGE, the first in her Kyn Kronicles series.

“SHADOW’S EDGE by Jami Gray will definitely keep you on the edge…of your seat, that is. This fantastic paranormal action novel is quite possibly the best book I’ve read this year.” – The Romance Reviews