Fans of Ken Follett will love this FREE March 2022 release in historical thrillers! The Twelve Doors: Part I by Vicente Raga 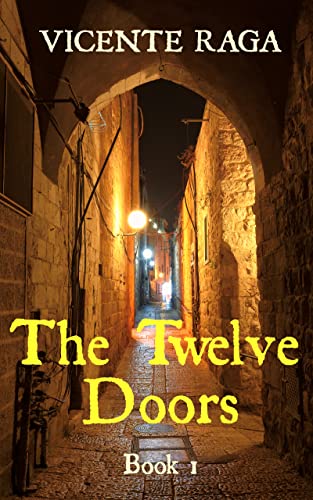 #3 Instant bestseller historical mystery thriller in the USA on the day of its release. #1 bestseller in Spain and Mexico. More than 600,000 readers around the world.

BASED ON REAL EVENTS. In the 14th century, three children discovered an astonishing ancient Jewish secret. Now, a famous historian and her mysterious friend attempt to unravel it. Mystery, adventure, suspense and real history in an easy-to-read novel that won’t allow you to put the book down. Do you dare to try it?

“The Twelve Doors is the best saga of thrillers I have read in ten years. With simple language that manages to keep you in suspense until the last line. You finish a chapter and you need to read the next one. Vicente Raga it’s a real find.” Harald Brook, Tribuna Libre.

“Sell more than Ken Follet last Christmas in Spain is far from the reach of many. In my house, all my family has read it, even my three sons. Dynamic narrative and a documented novel. Very recommendable.” Roberto Marín, Florida Books.

Two stories are narrated in parallel. The first one happens in 1390, in a Jewish quarter, where some kids stumble upon a secret society that still exists nowadays. A great mystery that takes us back to that difficult period for the Jewish people. All the characters existed in their time period, and every narrated fact occurred in reality. The second story stars a group of friends in the present day that must solve a centennial-old mystery.

Without a doubt, the highlight of the series is their female main characters, the historian Rebecca Mercader and her mysterious friend Carlota Penella, whose fame has surpassed the novel series itself. It isn’t strange because they are among the most Intelligent women in Europe.

The reader changes the story every 4-5 pages. Different characters and tales are separated by more than six hundred years. It looks like two novels in one. The reader starts asking himself, why I am reading two stories with no connections? The simple answer is that you will figure it out if you keep reading. Maybe they have more connections than you think, and nothing is what it seems.