2-in-1 BOXED SET ALERT! The Magician and The Fool: An Arcana Glen Sweet Paranormal Romance by Tara Maya

The Magician and The Fool: An Arcana Glen Sweet Paranormal Romance 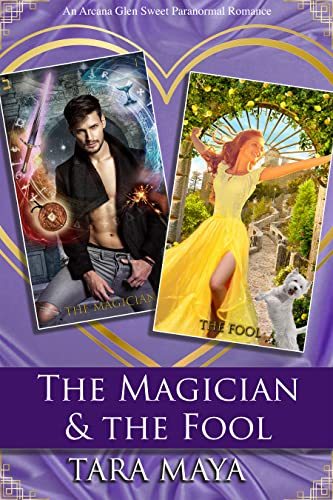 4.0 stars – 8 reviews
Kindle Price: 99 cents
Supports Us with Commissions Earned
Enjoy Tara Maya Books? Tell us why and WIN a chance for a FREE ebook!
Here’s the set-up:
THE FOOL
Bethany Dilly was a fool, and she knew it. What woman would agree to an arranged marriage to a man she’d never met? Even if he was gorgeous, sexy, talented, and mysterious, a famous Las Vegas Magician, and a billionaire who lived in an honest-to-gosh castle in the remote mountain town of Arcana Glen in the Rocky Mountains. Rumors swirled around him that his previous six wives had all vanished under mysterious circumstances.
But Bethany agreed to become Wife Seven to save the life of her best friend.THE MAGICIAN

Alephander Guiscard’s secret to success as a Magician is simple—his magic is real. He is, in fact, the most powerful wizard, not only on Earth, but in all the Seven Mortal Spheres. He is the last of the twenty-two Guardians who once warded the Gates between the Elven, Angel, and Demon realms and the Mundane Human world.

After keeping a vow of silence for nearly a century, Alephander is on the verge of his greatest triumph. The only catch is that to complete his most magnificent spell yet, he must find a wife who can go an entire year without speaking. This is his last chance. He needs a woman who is somber, quiet, and above all, obedient.

Bethany, his latest bride, is NOT that woman.