It’s Giveaway time! Get a free bonus entry into our weekly raffle and check out In Search of Christian Origins: A Timeline of the Good, the Bad, and the Ugly by J. Steven Paul

In Search of Christian Origins: A Timeline of the Good, the Bad, and the Ugly 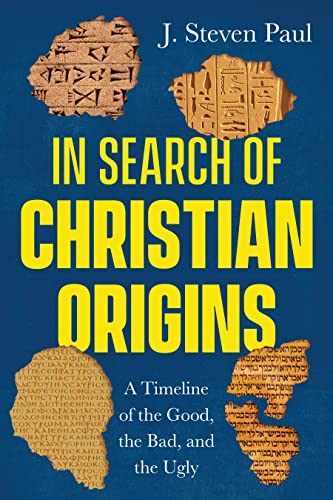 A fascinating history that reveals Christianity’s roots, its often-unknown and surprising traditions, and its influence on the world today.

There is the accepted, often-repeated version of Christian history—and then there’s the real story. In this gripping volume, author J. Steven Paul uncovers the little-known details of the world’s largest religion.

How did Christianity originate? Who created its earliest writings? Who decided which books would be in the Bible? Where did the ideas of heaven and hell originate, and when did people begin taking the Bible literally? How did Christianity evolve and fracture into the many forms it takes today? From fascinating background on its central tenets to curious details that have been largely swept under the rug, this comprehensive overview traces Christianity from ancient practices through its centuries-long rise in popularity, power, influence, and dominance.

Paul’s detailed account sheds light on doctrine, dogma, and traditions, observing Christianity’s interaction with related faiths, including Judaism, Islam, “heretical” Christian sects, and atheism. Paul outlines how this once-tiny religious cult has shaped centuries of Western civilization and inspired great acts of compassion and kindness. But, in the process, it also viciously attacked its enemies, legitimized the practice of slavery, and collaborated in colonialism and imperialism while shaping the way communities continue to view social and scientific issues.

To understand Christian history is to unearth the roots of our current divisive American culture—and hopefully find the tools to fix it in order to grow into a more cooperative society.

Go to Giveaway Central to enter and to say thank you here is a bonus entry word: Christian