The Spanish Inquisition. A forbidden attraction. With their lives on the line, can a pair of courageous lovers defend justice? City of Liars by Michelle Fogle 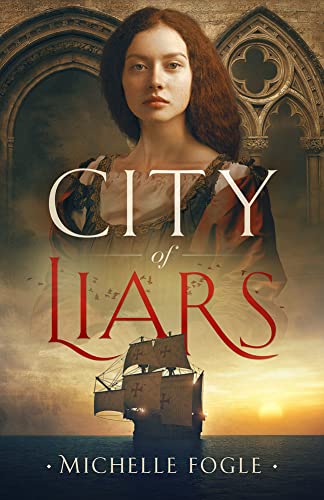 The Spanish Inquisition. A heart-stopping escape mission. With their lives on the line, can a pair of courageous lovers defend justice?

Barcelona, 1487. Joachim Déulocresca carries the weight of his father’s sins. Determined to honor his family name and rise above his shameful origins, he risks everything to smuggle sacred Jewish artifacts under their persecutor’s nose. But when he sees his mentor and friend arrested for heresy, the young navigator won’t rest until he redresses these terrible wrongs – despite being a wanted man on the run.

Catholic heiress Aularia Bautista wants for nothing. Sheltered from the harsh reality of the world, she’s horrified after witnessing a social rival brutally flogged and burned at the stake for her religion. Plagued with guilt and vowing to take action, she secretly joins forces with a handsome smuggler with plans to rescue those in the Church’s warpath.

As Joachim works with Aularia to covertly escort fugitives out of Spain, he feels himself falling hard for the driven beauty. And when Aularia uncovers the real nature of her parents’ history, she’s terrified their unlawful love will put them both in mortal peril.

Can their courage and passion burn bright in the darkness of anti-Semitic madness?

City of Liars is a heart-stopping historical fiction novel. If you like dangerous romance, vivid and terrifying settings, and edge-of-your-seat suspense, then you’ll adore Michelle Fogle’s mesmerizing tale.

Buy City of Liars to join the secret alliance today!