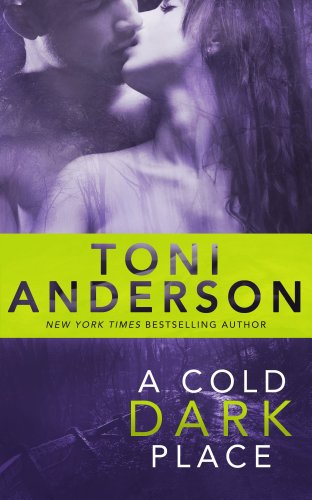 4.5 stars – 334 Reviews
Kindle Price: FREE!
Text-to-Speech and Lending: Enabled
Don’t have a Kindle? Get yours here.
Or check out the Audible.com version of A Cold Dark Place (Cold Justice Book 1)
in its Audible Audio Edition, Unabridged!
Here’s the set-up:
Winner of the New England Readers’ Choice Award for Romantic Suspense. Finalist in the 2015 Holt Medallion, and the National Excellence in Romance Fiction Award for Romantic Suspense.

Former CIA assassin Alex Parker works for The Gateway Project, a clandestine government organization hell-bent on taking out serial killers and pedophiles before they enter the justice system. Alex doesn’t enjoy killing, but he’s damn good at it. He’s good at dodging the law, too–until a beautiful rookie agent has him wondering what it might be like to get caught.

FBI Special Agent Mallory Rooney has spent years hunting the lowlife who abducted her identical twin sister eighteen years ago. Now, during an on-going serial killer investigation, Mallory begins to suspect there’s a vigilante operating outside the law. She has no choice but to take him down, because murder isn’t justice. Is it?

When Mallory starts asking questions, The Gateway Project management starts to sweat, and orders Alex to watch her. As soon as they meet, the two begin to fall in love. But the lies and betrayals that define Alex’s life threaten to destroy them both–especially when the man who stole her sister all those years ago makes Mallory his next target, and Alex must reveal his true identity to save the woman he loves.

One reviewer notes:
“The balance is tipped more towards suspense in this story but believe me, the romance doesn’t suffer and isn’t forsaken. Alex is a compelling “gray” hero, straddling those ethical lines. I couldn’t find a good stopping point so I gave up trying to sleep and got up in the middle of the night and finished the book.” The Book Nympho