Can Nick Bracco track down Garza before the assassin finds him first?

A Touch of Greed
A Nick Bracco Thriller Book 3

Nick Bracco FBI’s top anti-terrorist agent is drawn into the hostile environment of the Arizona-Mexico border.

Get It Now
See more by this author!
Categories: All Mystery, Crime & Thrillers; Bestsellers

A Touch of Greed (A Nick Bracco Thriller Book 3) 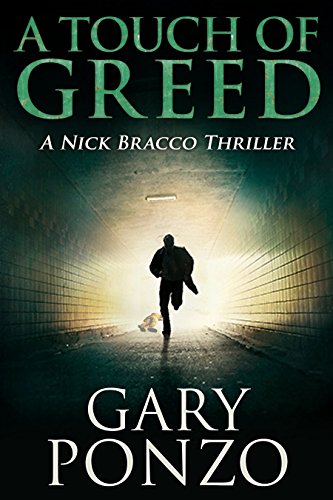 NY Times Best Selling author John Locke: “Gary Ponzo’s thrillers are so powerful, the government should use them as a renewable source of energy.”

In this high-octane thriller, Nick Bracco, FBI’s top anti-terrorist agent is drawn into the hostile environment of the Arizona-Mexico border. A member of his task force is ambushed by Mexican assassin, Antonio Garza, known as, “The Butcher,” while trying to prevent the cartel staffer from transporting a dirty bomb into the US. As the agent is on the verge of slaughter, he calls Bracco with one last plea: Kill him.

Garza, however, uses his cartel money to reach over the border and secure a network of US law enforcement to be on his payroll. Bracco is forced to track him down with just a couple of agents he can trust, plus his cousin Tommy.

Tommy is a shrewd character with extensive Mafia contacts who offer their underground assistance as Bracco spearheads the deadly game of Sicilians versus the cartels.

Can Nick Bracco track down Garza before the assassin finds him first?