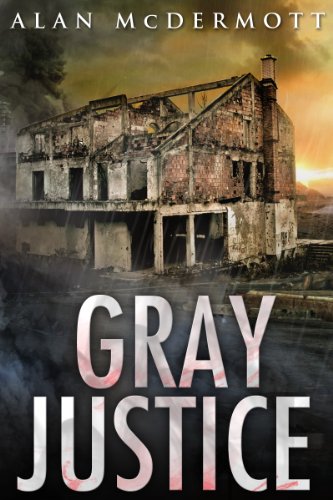 4.2 stars – 324 Reviews
Kindle Price: FREE!
Text-to-Speech and Lending: Enabled
Don’t have a Kindle? Get yours here.
Here’s the set-up:
Gray Justice is the fast-paced debut thriller from Alan McDermott. When a killer walks free from court, the victim’s father sees just two options: accept the judge’s decision; or take on the entire British justice system. Tom Gray chooses the latter and his crusade attracts instant worldwide media coverage. It was just what Tom was hoping for, but it brought him a lot more than he bargained for.
Gray Justice is much more than a simple tale of revenge: it’s a rollercoaster ride with an ending you’ll never forget!
Readers’ Reviews

“This is an ingenious plot, with some surprising but well thought out twists and turns. The pace is fast, and all aspects of the book appear to be well researched – so much so that you might wonder if the author had himself been a member of the SAS. Gritty and brutal in places, McDermott paints very strong visual images throughout the story. I loved the idea of Tom Gray being more than just your average vigilante… ” – – Rachel Abbott, Amazon #1 bestselling author of Only The Innocent

“Would love to see a film adaptation. McDermott is sheer class!”

“Alan McDermott is an author to watch out for in the future, his originality makes him stand out.”

“This book will make an awesome blockbuster movie one day.””An outstanding debut novel and an absolute must read for everyone.”

About The Author
Alan McDermott is a software developer from the south of England, married with beautiful twin daughters. When he isn’t creating critical applications for the NHS, he is writing action thrillers.

His debut novel, Gray Justice, has been very well received. The other two books in the series – Gray Resurrection and Gray Redemption – were released in 2012.

Alan is currently working on his fourth title. For more information, visit Alan’s blog at http://jambalian.blogspot.com/.