Artificial Evil (Book 1 of The Techxorcist) 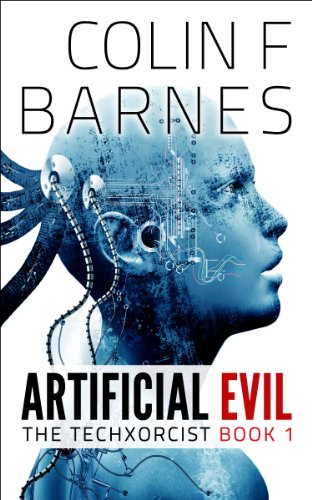 Artificial Evil (Book 1 of The Techxorcist series) is a post-apocalyptic, dystopian, high-stakes adventure.

In a post-apocalyptic future, humanity survives within a single domed city run by a shadowy benefactor known only as The Family. Each week the death lottery claims more lives and Gerry Cardle, head of the lottery, inexplicably finds himself the next on the list.

Something’s wrong with the system. A deadly artificial intelligence has breached security. Gerry has just 7 days to live. Forced off the grid, Gerry has to do the unthinkable: willingly leave the city. What he finds in the abandoned lands will shatter his perception of what it means to be human. Everything he had been told before was a lie.

In a deadly world of conspiracy, violence, and artificial intelligences, Gerry has to sacrifice everything he loves in order to save it, and time is running out.

Colin F. Barnes is a publisher and full-time writer of suspense and techno thrillers and a member of both the British Fantasy Society and the British Science Fiction Association. He honed his craft with the London School of Journalism and the Open University (BA, English).

Colin has run a number of tech-based businesses, worked in rat-infested workshops, and scoured the back streets of London looking for characters and stories–which he found in abundance. He has a number of publishing credits with stories alongside authors such as: Brian Lumley, Ramsey Campbell, and Graham Masterton.

And here, in the comfort of your own browser, is your free sample of Artificial Evil by Colin F. Barnes:
Search