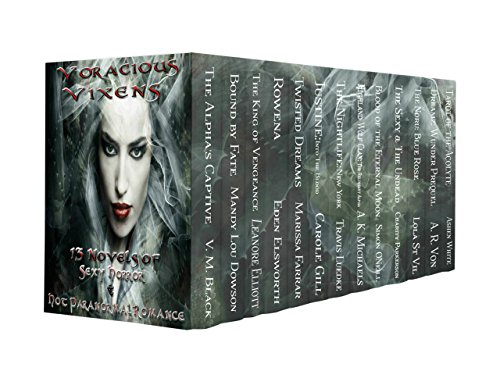 The Nightlife New York By Travis Luedke – Aaron Pilan is thrust into the shocking world of vampire slavery when Michelle shares her blood to save him. Under her neurotic control, Aaron experiences a sensory and sexual awakening while adhering to her deadly strict feeding regimen.
The Noru: Book I, Blue Rose By Lola StVil – Half angel, half demon fall in love with angel. He didn’t know he loved her until he walked through fire to save her. Love, scandal, romance and blood; So much blood…

Taken & Pursuit, The Alpha’s Captive – Books 1-& 2 By V. M. Black – When Harper is carjacked by a sexy werewolf biker, it’s the start of the ride of her life. The first two novellas of The Alpha’s Captive, Taken and Pursuit, are included in this set.

Blood Of The Eternal Moon By Simon Oneill – Trapped in a demonic asylum, a woman has 24 hours to become an Eternal Vampire before a monstrous evil takes all her blood and destroys our world.
Dreamz (The Wunder Prequel) By A.R. Von – Wunder may have a normal life now…well, as normal as a freak of nature could have. Half zombie while her job is to hunt bloodthirsty creatures to protect the innocent. It’s the dreams that haunt her and they aren’t nightmares.
Highland Wolf Clan Book 1 The Reluctant Alpha By A K Michaels – Cameron Sinclair is a billionaire with a secret; he’s a Wolf that rejects his heritage and right to be Alpha. That is until he is forced to face his DNA with a chance meeting of Chastity, a white She-Wolf that needs his help and he can’t refuse, can he?
The Sexy & The Undead By Charity Parkerson – Ella has spent years searching for a cure for a zombie named Freddie. When an experimental potion pulls an angel from the heavens, she’ll get a glimpse of the life she’s been missing by hanging out with the undead.
Twisted Dreams, The Dhampyre Chronicles Book One By Marissa Farrar – Half vampire Elizabeth Bandores moves to a new town to start college, but when carnie-boy Riley crosses her path, her hopes of a quiet life vanish…
Justine: Into The Blood By Carole Gill – An epic vampire journey from poverty to palaces, to embrace death in all its blood glory full of lust, passion, betrayal and finally love.
Rowena By Eden Elsworth – Lumbered with a hot angel with designs on her womb, Rowena has to find and nullify the spirit plaguing her new client, deal with revelations about who her father is, and shake off her addiction to her best friend with benefits, Stephen.
Bound By Fate By Mandy Lou Dawson – Beth is the only un-mated pure-bred female wolf in the Loam Floor pack – witty and hell-bent on making her own way in life. Join her as she uncovers a secret from her past that could destroy everything she loves.
Queen of Storms, Tales from the Tarot of the Acolyte By Ashen White – Think Tarot Cards are just for telling fortunes? Think again! Paranormal erotic horror that will curl your toes and make you hot in all the right places!
King of Vengeance, Beasts By Leanore Elliott – When Valentine gets the case of the Malibu Slasher, she also inherits the swaggering Hurt Legend Detective,Victor Payne. While a killer is disemboweling men, Payne has to look closer at his new partner, as no one is who they should be, including him.