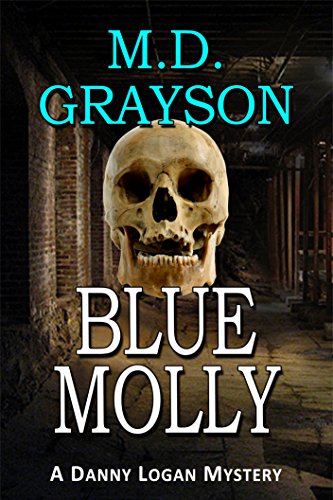 Danny Logan is back in action!

Get your copy of the latest adventure from Seattle author M.D. Grayson

Someone wants to buy Sylvia and Mike Lyon’s Pioneer Square office building in downtown Seattle and whoever it is won’t take “no” for an answer. With their building being vandalized and their tenant’s being driven away, the Lyon’s do what many Seattleites have done for the past six years when they need help: they hire Logan Private Investigations. The mission: find out who’s behind the harassment and make them stop.

Danny Logan, Toni Blair, Doc Kiahtel, and Kenny Hale swing into action and soon find themselves facing off against a brutal drug lord – a man with a brilliantly diabolical plan to take his Seattle Ecstasy business nationwide. He’s ruthless, driven, and all too willing to resort to violence to accomplish his goals. But now, he has a problem – a problem named Danny Logan.

Action packed yet humorous, set in Seattle’s historical Pioneer Square, Blue Molly is a story that will captivate you from start to finish.

M.D. Grayson is the author of the Danny Logan mystery series including Angel Dance, No Way to Die, Isabel’s Run, Mona Lisa Eyes, and Blue Molly. He lives on an island near Seattle with his wife Michelle and their three German shepherds.

Before becoming a full-time writer, Mr. Grayson worked in the construction industry, as an accountant for six l-o-n-g weeks (square peg–round hole), and as a piano player on the Las Vegas strip. When he’s not writing, he loves zooming about on two wheels– bicycles and motorcycles alike. In addition, he’s a pilot, a boater, and an accomplished musician who’s always ready for a jam session!