Battle of the Soul 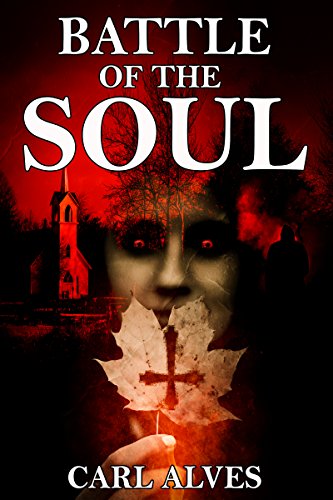 – Learn More
Text-to-Speech and Lending: Enabled
Available on Audible
Enjoy Carl Alves Books? Tell us why and WIN a chance for a FREE ebook!
Here’s the set-up:
Andy Lorenzo has no family, few friends, poor social skills, and drinks and gambles far too much. But in a time when demons are becoming increasingly more brazen and powerful, he has one skill that makes demons cower in fear from him — he is the greatest exorcist the world has ever known.
In Battle of the Soul, a supernatural thriller that is a combination of Constantine and The Exorcist, since graduating high school Andy has left a long trail of demons in his wake while priests are getting killed trying to perform traditional rites of exorcism. Andy is the Church and society’s ultimate weapon in combating this growing epidemic. He needs no bibles, prayers or rituals. Andy is capable of going inside the person’s soul where he engages in hand to hand combat using his super-human abilities that only reside when he is in a person’s soul. When eight-year-old Kate becomes possessed, Andy finds an elaborate trap waiting for him. He will do whatever it takes to win the most important fight of his life — the battle for Kate’s soul.

“Carl Alves does a masterful job in keeping the reader guessing. Battle of The Soul is one of those books that will stay with you!” – Armand Rosamilia, author of the Dying Days series