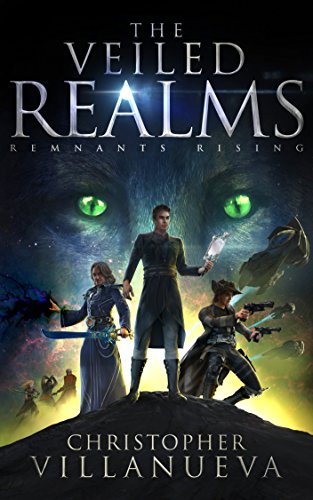 Shipwrecked on a bandit-controlled world, Lex Clark finds himself on the run from numerous gangs. He is soon kidnapped, however, by a shifty bounty hunter. But is there more to this gun-slinging rogue than meets the eye?

Meanwhile, unrest is sweeping throughout the galaxy. Peaceful allied worlds have become the target of invaders. Mercifully, their luck changes when vital intel is obtained. Can the worlds defeat this rising menace—and the most diabolical sociopath of the age?

In an effort to help, descendants of a mighty lineage march to war. Daring swordfights, frenzied shootouts, and explosive space battles are all that stand in the way.

And perhaps another growing threat as well . . . One which stems from the mysterious and shattered Veiled Realms . . .

The Gates of the Frontier Universe: A Society Called to Arms

– Learn More
Or currently FREE for Amazon Prime Members Via the Kindle Lending Library
Text-to-Speech and Lending: Enabled
Don’t have a Kindle? Get yours here.
Here’s the set-up:
Following the mysterious events of the catastrophic ‘Court War,’ the most diabolical sociopath of the age has returned. A devastatingly powerful psychic warrior and unmatched strategist of war, this terror will suffer nothing in his plot to conquer the realms of the Court.

Join the heroic descendants of a mighty lineage as they quest for ancient artifacts vital to their salvation. Through daring swordfights and frenzied shootouts, battle alongside cunning warriors, defending the worlds against enemy invasion. From the eyes of a decorated general, scheme with Pirates and plot the domination of the Court.

And lastly, uncover the truth of the highly enigmatic Frontier Universe and the threat its fall poses to their modern society.
“It stated off reminding me of Star Wars. The story line kept me very interested and I thoroughly enjoyed all of the characters. There was a lot of plot twists and it keeps you wanting to know what happens next. I look forward to reading the rest of the series.” ★★★★★5-star Amazon review
Click here to visit Christopher Villanueva’s Amazon author page