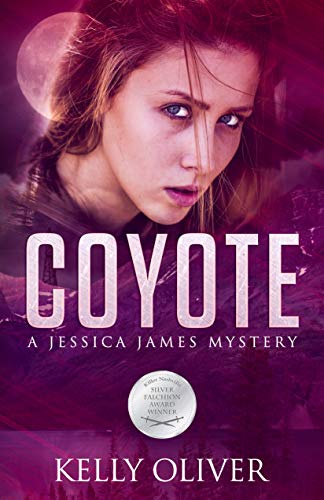 She came back for vacation. If she’s not careful, she might leave in a body bag…

Ivy League student Jessica James isn’t thrilled to be back home in Montana. But her boring summer break becomes a nightmare when her cousin dies at the local sawmill. Devastated by the death, she can’t help but draw connections between the supposed accident and her own father’s unsolved demise…

With the mill’s owner pushing hard to start fracking on Native American Blackfeet land, Jessica starts to connect the dots between the killings. And when two young girls go missing, Jessica calls in her posse to fight blood with brains.

Can Jessica expose the town’s dirty money, or will she too end up as sawdust?

COYOTE is the second standalone novel in the action-packed Jessica James mystery series. If you like laugh-out-loud entertainment, fearless heroines, and a dash of real-world issues, then you’ll love Kelly Oliver’s riveting tale.