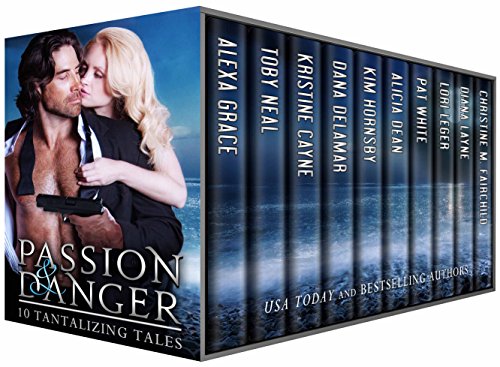 Love alpha males? We’ve got ’em! Fall hard for a rogue FBI agent, a Special Forces soldier, a Mafia don, an action-movie star, a DEA agent/ undercover wrestler, a county prosecutor, a Honolulu cop, even the Grim Reaper! Step into the shoes of our kick-ass heroines–a war photographer, a Mafia princess, an FBI agent, a scuba instructor, a road designer, a nurse, even a Mid-West farmer. Travel around the globe, fighting bad guys from Hawaii to New York City, from the Midwest to Louisiana, from Hollywood to Italy!

If you only have one dollar to spend on books this summer, this is it!Together for the first time! 10 Tantalizing Authors, including USA TODAY and Amazon Bestselling, Multi-Award-Winning Novelists of Romance, Suspense, Crime, Mystery, Humor, and Paranormal.
5-star Amazon reviews:
“Great collection and well worth the small price.”
“What a fabulous cause, and a delicious summer read!” 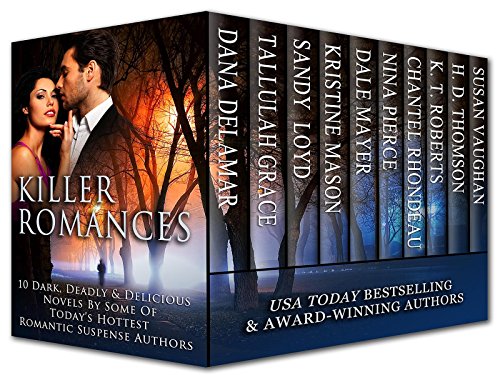 4.9 stars – 10 Reviews
Kindle Price: 99 cents
Text-to-Speech and Lending: Enabled
Don’t have a Kindle? Get yours here.
Here’s the set-up:

10 Dark, Deadly and Delicious Novels from some of today’s hottest romantic suspense authors. On sale for a limited time for only $0.99. Romance, mystery and danger abound with these tales of lethally sexy heroes and the women who bring them to their knees.

Revenge (Blood and Honor, #1) by Dana Delamar ~ Mafia don Enrico Lucchesi struggles to preserve a fragile truce with the Andretti family. But when Kate Andretti flees from her abusive husband, Enrico won’t leave her in jeopardy. Can he save her without reigniting the bloody feud between the families? **Double-finalist in the 2013 Booksellers’ Best Awards!**

Cliffs of Starsdale by Bestselling author Tallulah Grace ~ Starsdale, California offers a picturesque setting with a small-town atmosphere. It’s hard to believe anything bad could happen in such an idyllic place, but Chelsea Bates finds that evil lurks beneath the surface of someone she trusted, someone she loved. Even in Starsdale, life is not always what it seems.

Deadly Misconceptions an award winning story by Amazon and Barnes & Noble bestselling author Sandy Loyd ~ When former runaway Lucy Maddox’s mentor goes missing, the PI risks everything to find her. She’s even willing to team up with nemesis Jack Finnegan, who’s only out to prove his boss isn’t responsible for the disappearance. Their chase to solve the mystery quickly becomes a struggle to stay alive.

Shadow of Perception (Book #2, Core Shadow Trilogy) by Kristine Mason ~ After a reporter receives threatening, gruesome DVDs, she turns to the criminal investigation agency CORE for help. Only her former lover is assigned the case. Now they find themselves not only knee-deep in a twisted investigation, but forced to deal with their past and the love they’d tried to deny.

Haunted by Death (By Death Series #2) by USA Today Bestselling author Dale Mayer ~ Anthropologist Meg Pearce’s life hasn’t been the same since her friend disappeared seventeen years ago. She lost everything then including Detective Chad Ingram. Now he’s back and together they are looking to solve the mystery. Only death isn’t done shaking up their lives … and this time they are in the crossfire.

Blind Her With Bliss (Dangerous Affairs Series #1) by USA Today Bestselling author Nina Pierce ~ Investigating the death of her best friend, uptight accountant, JULIE TILLING, discovers a world of adult nightclubs and Internet intrigue. When shock jock DAMON COREY rocks her world in a wild night of lust, she wonders if she’s found love…or the key to solving a murder.

Love & Deception (Agents in Love #1) by Chantel Rhondeau ~ Secret Agent Nick Kendall is infiltrating a suspected terrorist organization. The problem? He’s falling hopelessly in love with Carlie Hollis, a key player of the group. Soon he receives new orders-kill the target. Will he follow those orders…or become hunted himself?

The Last Witness by Amazon Bestselling author K.T. Roberts ~ NYPD detectives Tate Kensington and Zachary Gerard are convinced one killer is at work, but proving it seems an impossible feat until a pre-teen prank blows the case wide open. Can the pair put away a killer on a paper-thin case? Or will their disappearing Jane Doe prove to be…THE LAST WITNESS…

Shrouded in Darkness (Shrouded in Darkness #1) by Multi-award winning author H. D. Thomson ~ If Jake Preston doesn’t stumble upon a miracle, he’ll end up dead. And even if he does, he still might end up dead with a clever killer hounding his heels. He believes the key to reversing an experiment that is killing him is locked away in Margot Davenport’s home.

Primal Obsession by Award-winning author Susan Vaughan ~ Reporter Annie Wylde and former Major Leaguer turned Maine Guide Sam Kincaid play cat and mouse with a killer on a wilderness canoe expedition. Chemistry sizzles, but lifestyles and baggage short circuit attraction. To defeat their enemy, they must work together and borrow from each other’s strengths. ** Winner More Than Magic Award **