by Chris Pourteau and David Bruns 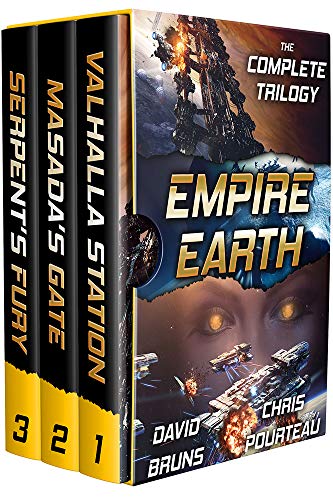 3 Full Books. 1,000 pages of space opera filled with intrigue, betrayal, and high-octane action that will keep you turning pages long into the night.

Book 1: Valhalla Station
Harmony. Security. Obedience. Three decades ago, the Syndicate Corporation saved Earth from climate catastrophe. Now the Company runs the solar system like a well-oiled machine. Its citizens work Sol under rule of corporate law, every aspect of their lives regulated from cradle to grave. Some call that slavery. But does mankind really want to be freed?

Book 2: Masada’s Gate
Cult leader Cassandra Kisaan and her Soldiers of the Solar Revolution claim humanity deserves better than indentured servitude under the Syndicate Corporation. Determined to end SynCorp, she attacks Company assets on multiple fronts across the Sol System. Taking Masada Station, where the Company secures its tech secrets, will ensure her final victory. But Enforcer Stacks Fischer and a band of SynCorp loyalists stand in her way…

Book 3: Serpent’s Fury
The struggle for the Company’s survival comes home to where it all began: Earth. SynCorp and SSR starships prepare for a final, bloody engagement above mankind’s birthplace and the seat of the largest corporate empire in history. Meanwhile, planetside, another fight rages against Cassandra herself. The decisive battle for mankind’s soul has yet to be decided on the ground or among the stars. Who will live? Who will die? What fate awaits humanity when the dust of battle clears?

Buy this Special Edition Boxed Set to experience a Sci-Fi thrill ride that keeps accelerating, right up to the very end. 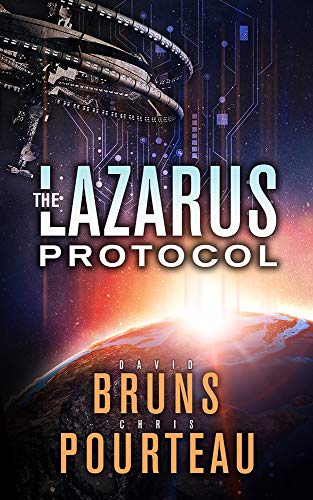 Though some believe our future lies among the stars, the American President funds the Lazarus Protocol—a last-ditch attempt to reverse Earth’s climate crisis through geoengineering. But the New Earth Order—a mysterious league of reactionary activists with sleeper agents around the world—pursues another outcome: the subjugation of mankind to nature itself.

A brilliant billionaire who wants to save the world. A lunar engineer called home to bury her father. A disgraced veteran haunted by yesterday’s mistakes. A US Army colonel, desperate to save as many people as possible.

Four lives. One planet. And one last chance to save it…

Brought to you by the best-selling writing team of Bruns & Pourteau, The Lazarus Protocol is the first installment in The SynCorp Saga, a new series of dark sci-fi thrillers about the corporate takeover of our solar system.

Pick up The Lazarus Protocol to discover this exciting new series today!

“Characters you’ll love, action that’ll keep you turning pages long into the night … The Lazarus Protocol warns us what our future could be–if we even get there. — Rhett C. Bruno, USA Today bestselling author of The Circuit Trilogy