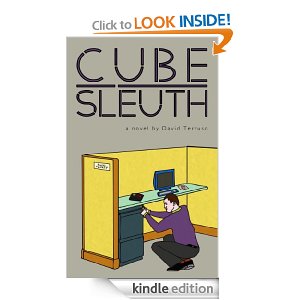 But first, a word from ... Today's Sponsor
As a professional cube and an amateur sleuth, I knew this book would be right up my alleyway. Mr. Terruso's novel is gripping and hilarious, right to the end. I would certainly recommend this book to anyone who asks.
Cube Sleuth
by David Terruso 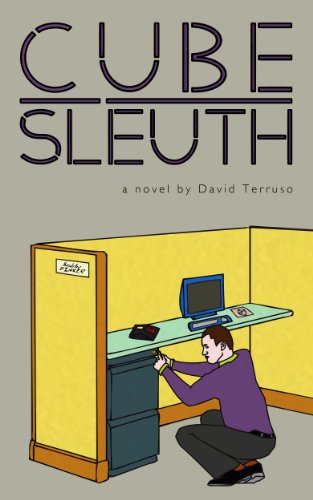 5.0 stars - 9 reviews
Kindle Price: $2.99
Supports Us with Commissions Earned
Text-to-Speech and Lending: Enabled
Here's the set-up:
BOBBY PINKER hates his humdrum corporate job. He only has one friend at work, a comedian named Ron. Just as their friendship starts to blossom, Ron is found dead in the office parking garage.

The police rule Ron’s death a suicide, but Bobby becomes convinced one of his coworkers murdered him. He starts snooping around the office, slipping voice-activated tape recorders under desks, breaking into the HR filing cabinet, and tailing people home.

Bobby’s investigation will likely get him fired. It will possibly get him arrested. And if he isn’t careful, it just might get him killed.

CUBE SLEUTH is a dark comedy and an amateur-detective murder mystery.
A tragedy told with comedic timing.
And a raunchy tale of a twenty-something bachelor whose libido leads him down a dangerous path.

If you like mysteries with richly developed characters, crisp dialogue, bizarre twists, and boner jokes, this is the book for you.
One Reviewer Notes:
I became absorbed in this book. The numerous references to movies, actors, songs were intriguing. The relationship between the detective and Bobby enchanting. You see the main character grow, and you cannot put the book down until the murder (or, was it a murder) is solved. You keep guessing throughout the book, until.....
Keyser Soze Andre'
About the Author 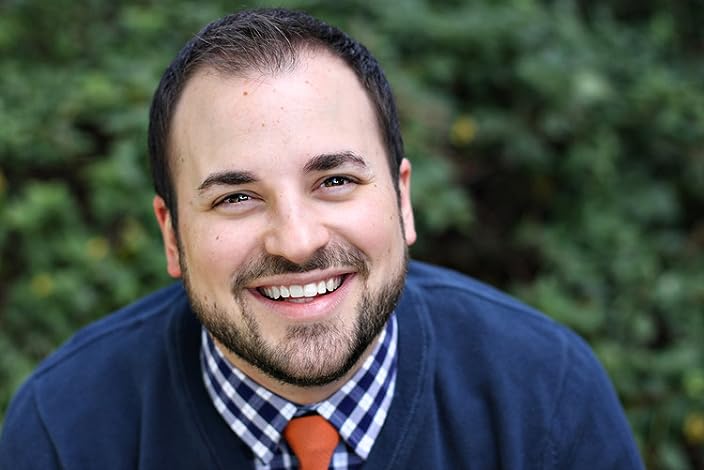 Hi, I'm Dave Terruso. I'm 33 years old and I live on Earth. (I wrote this in March of 2013, so depending on how many years later than that you're reading this, add numbers to how old I am.) I am a novelist/screenwriter. I studied creative writing under Justin Cronin, PEN/Hemingway Award-winner and author of The Passage. I am also a stand up comedian. I work at Helium Comedy Club in Philadelphia, where I have opened for acts including Gilbert Gottfried, Dana Gould, Charlie Murphy, and Richard Lewis. I am also also a sketch comedian. My sketch comedy duo Animosity Pierre have been praised by TIME Magazine. We were official selections of the 2010 Chicago Sketchfest and the 2010 San Francisco Sketchfest. I co-founded Philly Sketchfest, a national sketch comedy festival now in its fifth year. I also co-founded Comedy Month, the largest festival in Philadelphia dedicated solely to comedy.
UK CUSTOMERS: Click on the title below to download
Cube Sleuth

And Here Are Six Free Kindle Titles – Just For Today!

Prices may change at any moment, so always check the price before you buy! This post is dated Monday, April 29, 2013, and the titles mentioned here may remain free only until midnight PST tonight. 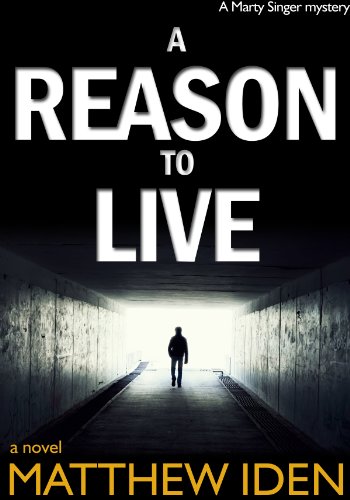 4.6 stars – 103 Reviews
Kindle Price: FREE!
Text-to-Speech and Lending: Enabled
Don’t have a Kindle? Get yours here.
Here’s the set-up:
In the late nineties, a bad cop killed a good woman and DC Homicide detective Marty Singer got to watch as the murderer walked out of the courtroom a free man.

Shark & The Wolf: Predators and Prey 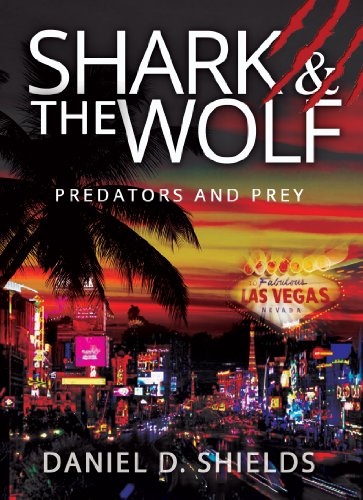 4.0 stars – 27 Reviews
Kindle Price: FREE!
Text-to-Speech and Lending: Enabled
Don’t have a Kindle? Get yours here.
Here’s the set-up:
Pack your bags for the wild side and hang on tight! Stamp your passport for adventure and enter an exotic world where animals have evolved side by side with humans. Prepare to be transported into an Indiana Jones style adventure and taken on a globe-trotting trek from the vast open plains of Africa, to the breathtaking beaches of Key West and Fiji, to the mysterious jungles of South America, before finally landing inside the gates of Sin City itself – Las Vegas, Nevada. Suspend belief and lose yourself in this roller coaster of a sci-fi thriller that has been called a cross between Planet of the Apes, The Hunger Games and Indiana Jones. 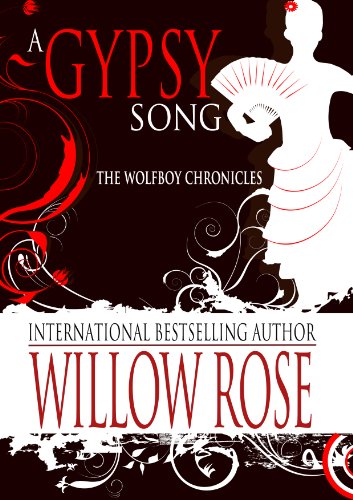 Please Tell Me I’m On Mute 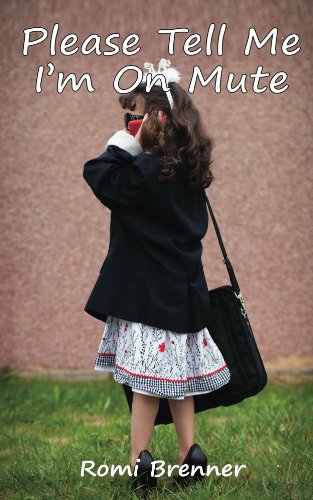 5.0 stars – 5 Reviews
Kindle Price: FREE!
Text-to-Speech and Lending: Enabled
Don’t have a Kindle? Get yours here.
Here’s the set-up:
Working mothers of the world, your voice has arrived. Trying to preserve her last few precious shreds of sanity while working and raising children, Romi Brenner has come to terms with the fact that sometimes you have to turn a blind eye to the fashion whims of a four year old, that you can never underestimate the power of a phone with a working mute button, and that pedicures just aren’t for everyone.

The Survival of Thomas Ford 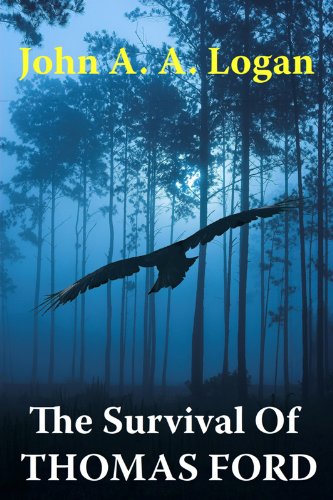 4.6 stars – 41 Reviews
Kindle Price: FREE!
Text-to-Speech and Lending: Enabled
Don’t have a Kindle? Get yours here.
Here’s the set-up:
Thomas Ford is the only survivor of the car crash which killed his wife. He is also the only witness who would be willing to identify the young, reckless driver who caused the crash. But the driver has no intention of ever letting himself be identified, not to mention what his father’s intentions are…or those of his girlfriend, Lorna, the hospital cleaner. 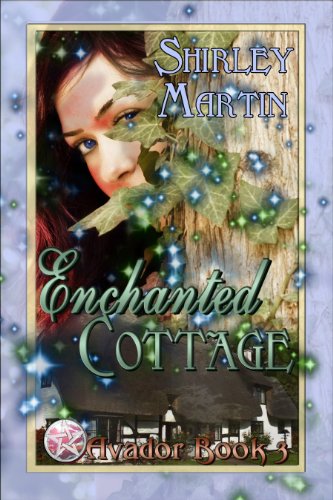 4.0 stars – 7 Reviews
Kindle Price: FREE!
Text-to-Speech and Lending: Enabled
Don’t have a Kindle? Get yours here.
Here’s the set-up:
An evil witch places a curse on Alana Cullain, turning the once beautiful woman into an ugly hag. Chased from her village, Alana seeks sanctuary in the dark forest. There she finds a strange cottage, one she had never seen before, and makes her home there.