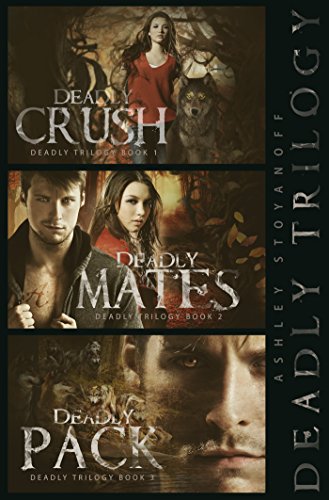 Kindle Price: 99 cents
Text-to-Speech and Lending: Enabled
Don’t have a Kindle? Get yours here.
Here’s the set-up:
LIMITED TIME SALE

Get the entire Deadly Trilogy in this eBook collection from award winning author, Ashley Stoyanoff, for only $0.99!

Dog Mountain is just like any other small town — peaceful and uneventful. Well, that is if peaceful means wolves howling all night, and uneventful means it’s overrun by pesky werewolves, then yes, Dog Mountain is just your average small town.Jade Shaw has spent the last two years avoiding the pack. But when Aidan Collins moves to town, avoiding the dogs doesn’t seem possible. The pack wants him just as much as she does.Determined to keep him out of the pack’s grasp, Jade does everything she can to gain his attention. Little does she know, Aidan is in deeper with the pack than she could have imagined, and competing for his attention is a deadly game, one she may not want to win.

Jade never thought she’d embrace being a werewolf, but after having accepted her new role as alpha female of Dog Mountain’s pack, she finds herself doing just that. She’s training with the enforcers and learning to use the alpha within her to her advantage. And for the most part, Jade is content, well at least with her training she is.

But Dog Mountain is a small town with big problems. The new alpha pair is divided, splitting the already unstable pack with them, and to make matters worse, Jade’s father is on his way home. Except Jade’s father and his twisted pack of werecourgars aren’t the only threat.

When Aidan brings in a new set of enforcers to weed out the problems within the pack, Jade is forced to delve into the center of the issue. She soon realizes that she is the indirect cause of the uneasiness within the pack, and if Jade doesn’t fix it, she’ll lose everything, even Aidan.

Since becoming the alpha female of the Dog Mountain pack, Jade certainly has had her share of challenges. She’s had to prove herself to a bunch of werewolves that she spent years hating; forgive her mate who’d done nothing but lie to her, and face the grueling fact that her father leads a pack of werecougars, who are responsible for tormenting her werewolves for many years.

On the upside, the Dog Mountain pack is finally coming together—now that Jade and Aidan’s mate status is official. And now that they know where her father’s been hiding his nasty pack of beasts, Jade and Aidan can concentrate on stopping them once and for all.

But when Jade’s dad finds out that she’s become Aidan’s official mate, all hell breaks loose, and Jade and Aidan soon learn that his plans for their werewolves are bigger than anyone could have ever suspected.

And here, in the comfort of your own browser, is your free sample of Deadly Trilogy: