“Be afraid. Be very afraid. And be utterly absorbed by this riveting debut that had me reading till the wee hours of the night. A thriller star is born. Don’t miss A Human Element.”- International Bestselling Author M.J. Rose 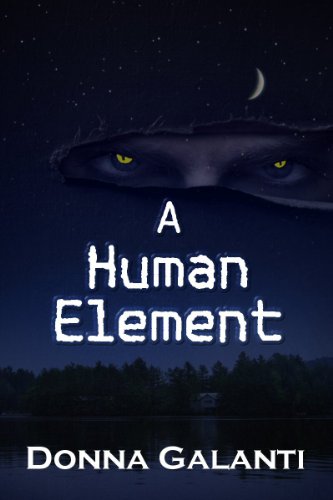 One by one, Laura Armstrong’s friends and adoptive family members are being murdered, and despite her special healing powers, there is nothing she can do to stop it. The killer haunts her dreams and leaves cryptic notes advising her to use her powers to save herself because she’s next.

Determined to find the killer, she follows her visions to her hometown and the site of a crashed meteorite. There she meets Ben Fieldstone, who seeks answers about his parents’ death the night the meteorite struck. In a race to stop a mad man, they unravel a frightening mystery that binds them together.

But the killer’s desire to destroy Laura face-to-face leads to a showdown that puts her relationship with Ben in jeopardy and her pure spirit to the test. With the killer closing in, Laura discovers her destiny is linked to the stranger and she has two choices – redeem him or kill him.

“A HUMAN ELEMENT is an elegant and haunting first novel. Unrelenting, devious but full of heart. Highly recommended.” –Jonathan Maberry, New York Times best-selling author of ASSASSIN’S CODE and DEAD OF NIGHT
“A genre-bending thriller with a huge, yearning heart. Galanti has given us an impressive debut. With her blending of romance, the coming of age quest, and the supernatural, she is a writer to watch, who will surely expand the diameters of the thriller genre.” –Catherine Stine, author of FIRESEED ONE
“Donna must have picked up on my weakness for Dean Koontz, because A HUMAN ELEMENT echoes the bestselling author in terms of creativity, the supernatural and overall dark allure. Add in a little paranormal romance and you’ve got one delicious literary paranormal mashup.” – Mina Burrows, Blog for the Paranormal & Mystical Minds
“A thrilling ride full of believable characters, a terrifying villain, an epic battle for survival, and a love worth killing for. The last third of the novel is a race to the finish, and I was glued to the pages, hoping the characters I’d grown to love would finally find the peace they deserved. A page-turner filled with fascinating twists and turns!” – Marie Lamba, author of DRAWN
About The Author

Donna Galanti is the author of the paranormal suspense novel A Human Element (Echelon Press March 2012). Donna has a B.A. in English and a background in marketing. She lives with her family in an old farmhouse in PA with lots of nooks, fireplaces, and stinkbugs. Visit her at: www.donnagalanti.com