by B. G. Brainard 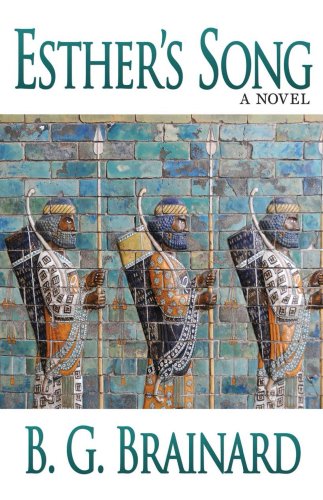 Esther’s Song presents a realistic fictional account of Esther; the Jewish queen immortalized in the Bible book bearing her name. This historical novel imagines how a Jewish orphan, adopted by her cousin Mordecai, successfully navigated the lethal corridors of a royal harem, withstood palace intrigue, and overcame religious persecution to marry Xerxes, King of the Persian Empire, and save her people from extermination at the vengeful hands of Haman the Agagite.

“I have read hundreds of “bible stories” over the course of my life. None have had the high level marks in so many areas that ESTHER’S SONG does. 1) It is a page turner – I stayed up late reading it every night until finished. 2) It is meticulously researched and historically accurate – one could be either a biblical or mesopotamian scholar, and no inaccuracy could be found. 3) It has the rare quality of being intellectually stimulating AND an upbeat, positive rendition of an old story that many have heard but never been truly interested in knowing more about. Brainard brings this ancient story into modern day parlance and relevance with interesting, compelling and strong female characters that are easily understood and admired by the 21st century woman, whether one is religious or secular.”

“Esther’s Song was a well-written novel that depicted the old testament Esther as a very real person that made me relate to her and keep reading.”

And here, in the comfort of your own browser, is your free sample of Esther’s Song: A Novel: