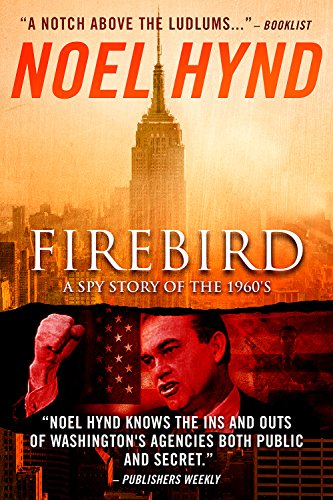 From Publishers Weekly: “Noel Hynd knows the ins and outs of Washington’s agencies both public and secret.”

From Noel Hynd, author of ‘Flowers From Berlin’ comes ‘Firebird,’ an intricate true-to-life spy story that spans half a century.

It is 1968, one of the most tumultuous years of the 20th Century. Frank Cooper, a former star investigative reporter now writes obituaries for a popular New York City tabloid. He hears the confession of a dying man named Leonard Rudawski, a former American diplomat, who bitterly questions the fate of Pavel Lukashenko, a would-be Soviet defector in Paris in 1965. Lukashenko promised to expose the espionage secret of a generation if he could get to the West. But the defector, code named “Firebird,” vanished.

Cooper teams with Lauren Richie, a young NY/Latina reporter from the same tabloid. They prowl into the dying man’s confession. Soon they are onto the story of their lifetimes, reviving a dangerous once-cold trail of back channel/back alley CIA and KGB intrigue and tradeoffs, all of which factor into the 3-way racially tinged American election of that year: Nixon vs. Humphry vs. the segregationist George Wallace. Murder, espionage, romance, betrayal and conspiracy intertwine. Readers will meet and recognize dozens of memorable “real life” characters: reporters, gangsters, diplomats, call girls, spy masters, politicians and assassins. The story is tough, large, sprawling and historically precise. “Russians sabotage and destabilize the west,” says one experienced reporter with KGB knowledge. “It’s not just what they do. It’s what they do best.”

The story straddles the decades from World War Two to 2018, even throwing a cynical light on Russian-American relations of today.

“Hynd is a solid, dependable writer with enough literary flair to move him up a few notches above the Ludlums and Clancys of the world. —Booklist