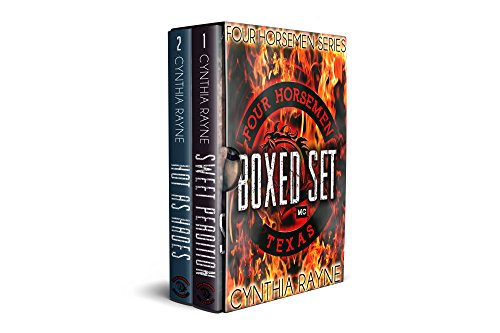 4.8 stars – 4 Reviews
Kindle Price: FREE!
Text-to-Speech and Lending: Enabled
Don’t have a Kindle? Get yours here.
Here’s the set-up:

Two sexy bikers in one boxed set. Take a wild ride on the road to Hell…Texas, that is.

This boxed set contains both Sweet Perdition and Hot as Hades.

Sweet Perdition
She’s been a good girl too long–now she’s ready to be bad. And on the back of a Harley is the best way to get there. Elizabeth Williams, single small-town librarian, knows she doesn’t belong in the notorious biker bar, Perdition. Especially not alone, in a frilly pink bridesmaid dress. But after watching her best friend marry her ex-boyfriend, she’s ready to drink her cares away. And break out of the good girl mold she’s been stuck in most of her life.

Ryker, member of the Four Horsemen MC, can’t take his eyes off the gorgeous, curvy redhead at his club’s bar. He suddenly has a taste for pink … and he’s going to get him some. Just for one night, of course, because Ryker doesn’t do relationships. Ever.

One night turns into more–until a wild party and a pair of naked blondes get in the way. Now she’s ready to run, and his pride demands he let her go. But when Elizabeth’s ex begins to stalk her, Ryker realizes he’ll do anything to keep her safe.

Hot as Hades
Saddle up for another wild ride with the Four Horsemen. Ex-Marine Daisy Weston is going undercover, by uncovering it all. Every night the pretty blonde wraps herself around a pole in a club owned by the Raptors MC–the club involved in her sister’s disappearance. One lap dance at a time, Daisy gets closer to discovering Rose’s whereabouts. She intends to free Rose, no matter who she has to do. There’s just one big, muscular obstacle in her way–a handsome biker named Cowboy who won’t leave her the hell alone. And what’s worse, she’s not sure she wants him to.

Former rodeo star, Cowboy, poses as a customer in the strip club for The Four Horsemen MC. He and his brothers despise the Raptors for running drugs and women, and they’ll go to any lengths to bring the Raptors down. But when Cowboy’s search for intel puts him up close and real personal with Daisy, he realizes she’s no ordinary stripper. This stripper is on a mission–one that might end her life, unless he can keep her alive. He lays down the MC law–either she works with him, or she doesn’t work at the club at all. Things get even more complicated when he finds himself falling for the sexy, feisty ex-Marine. Putting her in harm’s way every night is more and more difficult, but it’s too late to stop. They have to rescue Rose before the Raptors discover who they really are.

Enjoy Cynthia Rayne’s Books? Tell us Why and Win a Free Book!