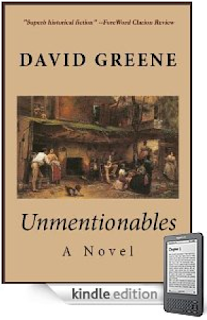 I don’t go out on a limb like this for one of our sponsors more than two or three times a year, but I hope you will read David Greene’s novel Unmentionables

, because it is a terrific, life-affirming read, unpretentiously priced at just $2.99.

I could care less about the little controversies that some will associate with it, because this book is so much better than you might expect if you focus on them. It should have a place in every reader’s library, and the sooner you make time to read it the sooner you will share the great experience I’ve had the past few days.
I’m not going to pigeon-hole Unmentionables

by saying “think Gone with the Wind meets Brokeback Mountain,” because that wouldn’t do justice to the novelist’s achievement in recreating a historical world that seems to suggest the impossibilty that he might actually have been present for everything that happened just outside Margaret Mitchell’s earshot.
One reviewer wrote about recognizing, in David Greene’s prose, a style similar to that of Anthony Trollope or other 19th century novelists. Although that frankly did not strike me, I will say that one important element of Greene’s triumph here is strikingly reminiscent of the great tradition of English novelists from Eliot and Hardy to D.H. Lawrence. Part of what made the English novel of the 19th and early 20th century so compelling was the existence of class and social barriers that locked characters out from opportunities to live their dreams.
American culture has often tended to homogenize our experience and deny the existence of such barriers to focus on less compelling personal idiosyncracies, but the barriers are there, they have always been there, and in Unmentionables

Greene gives resonance to those barriers, to their human cost, and to the passion and nobility that such barriers can inspire in “ordinary people.”
-Steve Windwalker
And here, in the comfort of your own browser, is your free sample:
IF YOU ARE READING THIS POST ON YOUR KINDLE, JUST ENTER
http://bit.ly/Unmentionables224
INTO YOUR COMPUTER BROWSER TO READ YOUR FREE SAMPLE
Search