While some publishers have greedily tried to raise prices to exorbitant levels, Books We Love Ltd. is committed to a very different and much better approach. And now they have outdone themselves with a series of compelling “Special Edition” 3-in-1 Bundles from popular authors, with each bundle priced at just $5.99. That’s right — less than $2 per title! Here’s today’s eBook of the Day: 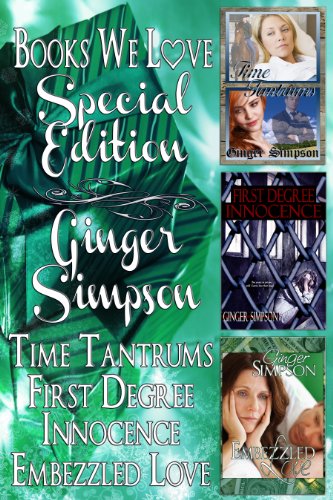 by Ginger Simpson
5.0 stars – 2 Reviews
Kindle Price: $5.99
Or currently FREE for Amazon Prime Members Via the Kindle Lending Library
Text-to-Speech and Lending: Enabled
Don’t have a Kindle? Get yours here.

Mariah Cassidy awakens in the twentieth century. Confined in a pristine environment, hooked to tubes and beeping machines, she’s scared, confused and wondering why everyone keeps calling her Mrs. Morgan. Who is the strange man who keeps massaging her forehead and telling her everything is going to be all right?

Taylor Morgan tries to focus on her surroundings through a blinding headache. The patchwork quilt, the water basin, and the archaic room don’t strike a familiar chord. Her mouth gapes when a handsome man waltzes into the room, calls her darling, and expresses his delight that she’s on the road to recovery.

Clearly something is amiss.

A terrible mistake has been made, and her insistence of innocence falls on deaf ears. Even her fellow inmates don’t believe her as it’s a claim they all make. Alone in the world, she has no one to turn to for help, and not a single soul to campaign for her freedom…at least until she makes a valuable friend. In the meantime, a plan for retribution is brewing, and naïve Carrie finds herself smack dab in the middle of an evil scheme concocted by the prison bully. A ten year sentence seems mild when she’s threatened with death for refusing to participate. Can Carrie find a way out of this horrible nightmare, or is she destined to spend her days locked in terror, isolation, and the cold gray interior of prison walls?

Seems everywhere she looks lonely divorcee, Cassie Fremont, sees advertisements claiming to help find her true love…the man of her dreams. With visions of a fairy tale romance, she follows the link in a SPAM message and joins an online dating service. Imagine her surprise when ‘he’ responds to her profile with toe-tingling interest. Will the Texas heartthrob be the answer to her prayers, or is she about to book a ride on the roller coaster from hell?

Don DiMarco lives a wonderful life with a family he loves, a comfortable lifestyle, and amusing passions and interests. He also thinks he has time, but some terminal news changes that. Summoning a dormant inner strength, Don seeks to prove 12 months is enough to live a life in full.