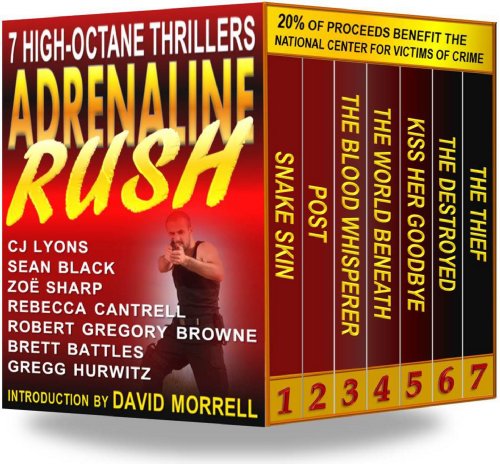 4.9 stars – 21 Reviews
Kindle Price: 99 cents
Text-to-Speech and Lending: Enabled
Don’t have a Kindle? Get yours here.
Here’s the set-up:

With an introduction by the incomparable David Morrell (creator of Rambo), ADRENALINE RUSH plunges you into the thrilling worlds of 7 highly acclaimed, award-winning and New York Times bestselling authors.

Help be a part of the solution: 20% of the proceeds from this special edition set of 6 full-length novels plus a bonus short will be donated to the National Center for Victims of Crime, providing resources, advocacy and training to help crime victims rebuild their lives.

SNAKE SKIN (A Lucy Guardino FBI Thriller) – CJ Lyons
A loving mom and wife, consummate professional, and kick-ass federal agent, Lucy Guardino is living the perfect life. Until she comes up against a predator more vicious and cunning than any she’s tackled before. Now Lucy must choose between the life of the young victim she’s fighting to save and that of her own daughter.
_________________

POST (A Byron Tibor Thriller) – Sean Black
Exhausted by combat and haunted by ghosts from his past, nothing will stop special forces veteran Byron Tibor from returning home to the woman he loves. Not even the American government hot on his tail. But nothing — from the Hindu Kush to Manhattan, or the underbelly of the Las Vegas Strip to his very life — is what it seems.
_________________

THE BLOOD WHISPERER – Zoë Sharp
After serving 5 years for involuntary manslaughter she can’t remember, the only work ex-CSI Kelly Jacks can get is crime-scene cleaner. But old habits die hard, and her instincts tell her a routine suicide is anything but. Someone doesn’t want her asking questions, and Kelly is soon on the run from police, Russian thugs, and gangsters.
_________________

THE WORLD BENEATH (A Joe Tesla Novel) – Rebecca Cantrell
Joe Tesla is a software millionaire trapped in the subway tunnels under New York City by his mental illness. There he uncovers FDR’s presidential train car and a conspiracy going back to World War II. But can he conquer his own inner demons to save the very world he fears to tread? (A 2014 International Thriller Writer’s Award Nominee!)
_________________

KISS HER GOODBYE (A Fourth Dimension Thriller) – Robert Gregory Browne
In a ruthless act of revenge by a charismatic madman, ATF Agent Jack Donovan’s daughter, Jessie, is kidnapped and buried alive, with barely enough oxygen to sustain her. Now the only man who can save her, the only man who knows where to find her has just been shot dead — and the clock is ticking…
_________________

THE DESTROYED (A Jonathan Quinn Novel) – Brett Battles
Mila Voss is dead. Now those who paid for her elimination want to know why she just showed up on a hotel’s security camera in Dar es Salaam, Tanzania. Jonathan Quinn, one of the best cleaners in the business and the man tasked with the disposal of her body, should know — but he doesn’t seem to be in a sharing mood.
_________________

“THE THIEF” (Short Story) – Gregg Hurwitz
When a mentally challenged teen with a penchant for stealing is framed for murdering his mother, relying on his innate talent may be the only way to outwit the real killer.