Like each one of our weekly sweepstakes, next week’s giveaway is sponsored by a talented author who has proven to be a favorite with our readers. Alice in Deadland author Mainak Dhar is springing for the Kindle Fire that could very well end up with your name on it, so it only makes sense to pay it forward and stimulate both your karma and your kranium at the same time by chancing $2.99 (or it’s FREE for Amazon Prime Members via Kindle Lending Library) to grace your Kindle with the latest release in his Alice in Deadland series!

Here’s the scoop on Hunting The Snark: An Alice in Deadland Adventure: 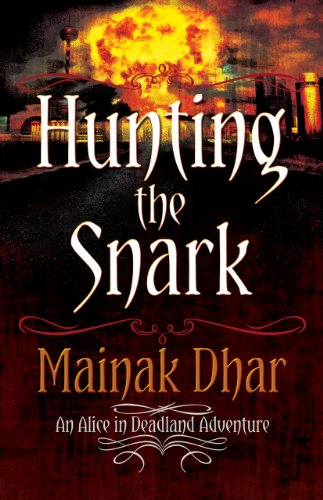 A thrilling new adventure in the bestselling Alice in Deadland series.

It has now been close to two years since Alice followed a bunny eared Biter down a hole, triggering off events that changed her life and that of everyone in the Deadland.

The Central Committee has been overthrown in Shanghai and the people of the Mainland freed from its tyranny. Red Guards no longer threaten Alice and the people of Wonderland and humans and Biters are beginning to learn to live with each other.

That short-lived sense of security is shattered when Shanghai is obliterated in a savage and sudden attack. When that same new danger threatens Wonderland, Alice must embark on a perilous journey to hunt down this threat.

This adventure takes her deep into the Homeland, a desolate land where her parents once came from; a land now torn apart by Zeus mercenaries, bandits and wild Biters; a once mighty and prosperous nation known as the United States of America.

Mainak Dhar is a cubicle dweller by day and author by night. His first `published’ work was a stapled collection of Maths solutions and poems (he figured nobody would pay for his poems alone) he sold to his classmates in Grade 7, and spent the proceeds on ice cream and comics. Mainak was a bestselling author in his native India with titles published by major houses like Penguin and Random House and with one of his novels (Herogiri) being made into a major motion picture. In early 2011, he began to use Amazon to reach international readers through his ebooks and became one of the leading independent authors in the world with more than 100,000 books sold in his first year. He has thirteen books to his credit including the bestselling Alice in Deadland trilogy. Learn more about him and contact him at mainakdhar.com.