And while you’re looking for your next great read, please don’t overlook our new Politics & Current Events Book of the Month! 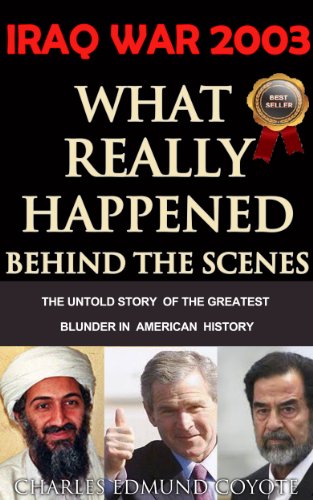 4.7 stars – 7 Reviews
Kindle Price: 99 cents
Or currently FREE for Amazon Prime Members Via the Kindle Lending Library
Text-to-Speech and Lending: Enabled
Don’t have a Kindle? Get yours here.
Here’s the set-up:

With more than 600 citations, ranging from insider memoirs to the accounts of journalists, former government officials, policy wonks, military leaders, and news broadcasters, the ‘Iraq War 2003: What Really Happened Behind The Political Scenes’ develops a thorough analysis of what led the Bush administration use the ‘War on Terror’ to attack Iraq.

Its first few chapters focus on the opening months of the Afghanistan War and Osama bin Laden’s escape in Tora Bora, then segue into the invasion of Iraq, telling how the Iraq War of 2003 unwound largely to the benefit of al-Qaeda and the fundamentalist government of Iran. The compelling narrative of ‘Iraq War 2003: What Really Happened Behind The Political Scenes’ is written almost in the manner of a novel that unpacks in an engaging and logical sequence detailed and documented information about a difficult time in modern American history.

The book ties together a considerable amount of information and provides a hopeful analysis by reminding us of where we have been. Patriotic concern – like the imprisoned lightning to which it subtly alludes – threads its way through the pages of this book, reminding its readers of the people, ideas, and inspirations that called for America to be its best.

After 4 years of research, I wanted to get this edition out, as it outlines a great deal of information the American people ought to be aware of if we are to have much chance of preventing similar disasters in the future. I intend to continue its development, however, along the lines of perspectives drawn from the philosophers of War (from Sun Tzu and Clausewitz, to America’s own Colonel John Boyd) in order to provide sharper relief to the critical lessons that need to be drawn from the Bush administration’s unfortunate choices.

I love this country, our constitution, and the rule of law under which we were founded. But I also understand that no nation can remain great without a great middle class and I fear these things are being rapidly eroded away with good jobs being sent overseas, misguided militarism, and a governing class more focused on self-advancement than their responsibilities to the citizens.

That we can be a great and good people was demonstrated by our response as a nation in the first days and months following September 11, but we are allowing ourselves to be mislead by a culture of greed and conformity and a poverty of understanding that wastes away our common ability to observe and make effective decisions.

People are choosing to see the world as they want it to be instead of as it is and so, as others have noted, our leaders become more extreme and ineffective while much of the country flounders.
This is not what America is about.

We are a young culture and in our short history, at times of crises, we have generally chosen the better path. Will we do that this time or persist in a self-destruction that comes under the guise of strength?