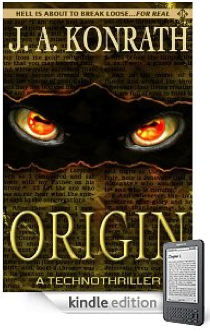 Sometimes it’s fun to be late to the party….

I got an email yesterday afternoon from bestselling thriller writer Joe Konrath. He wanted me to know about something he was doing that I personally think is very cool. He had recently lowered the Kindle price of his full-length technothriller Origin — “All hell is about the break loose. For real.” – to 99 cents, and it had jumped up to #109 overall among the bestselling books, games, and periodicals in the Kindle Store.

Lowering the price of such a popular book is cool enough, but what I think is pretty cool is that Joe posted a serious commitment on his blog, that he would… well, I’ll let Joe tell you:

There’s a charity called First Book, which buys books for children who don’t have any.

Joe doesn’t need to give anything away to be a bestselling author, and it’s not like he is a bleeding-heart do-gooder or anything. He’s just a generous, humble, and very talented man who enjoys a sporting proposition now and then.

He wrote to me because he thought that Kindle Nation might be able to help put Origin over the top, and he offered to pay for some sort of sponsorship if I could post something to help. I had two problems with that.

So now it is this morning, and does Joe need the help of Kindle Nation?

Way to go, Joe. I believe that’s what we call doing well by doing good. It’s kind of an old-fashioned concept in a world where way too many people believe they are entitled to far more than they’ll ever need, but it’s a good concept that i would love to see a lot more of. I think it’s such a great idea that I figure if it’s good enough for Joe it’s good enough for Steve. I don’t have Joe’s deep pockets, but I did just click on First Book to make a small donation in Joe’s honor.

So, where we stand now is that there is no need for anyone to buy Origin for the purpose of pushing Joe to make a donation, because he’s already there. 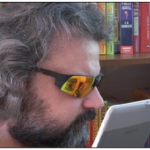 But I hope you’ll buy it anyway if you have not already read it, for two reasons:

And yep, that’s what you will find in Origin. Here’s the set-up:

When linguist Andrew Dennison is yanked from his bed by the Secret Service and taken to a top secret facility in the desert , he has no idea he’s been brought there to translate the words of an ancient demon.

He joins pretty but cold veterinarian Sun Jones, eccentric molecular biologist Dr. Frank Belgium, and a hodge-podge of religious, military, and science personnel to try and figure out if the creature is, indeed, Satan.

But things quickly go bad, and very soon Andy isn’t just fighting for his life, but the lives of everyone on earth…

All hell is about the break loose. For real.