Homicide detective David Bagini awakens on a strange world only to discover he is, in fact, the forty-second clone of the Bagini line. Having no memories of why his Prime entered into a clone contract, he wants answers.

The first problem is his Prime has been murdered and Bagini Forty-Two is now in charge of the investigation.

The second problem is all the clues point at one of his fellow clones and they already know all his tricks.

How can he solve his own murder when all the suspects have his name and face?

“If you like science fiction or a good mystery, this is a must read (and book to own for your kindle collection). ”  Steven Hansen  |  6 reviewers made a similar statement

“The premise of this story is incredibly clever. ”  David Edmiston  |  5 reviewers made a similar statement

“Of course, battling clones of himself provides ample opportunity for circular reasoning and much of the introspection Bernheimer’s heroes are famous for. ”  Connie J. Jasperson

The premise of this story is incredibly clever. It’s a murder mystery whodunnit where the victim is a homicide cop and the suspect shares his DNA. In this world where cloning is common, all of the 41 clones of detective David Bagini are suspects. To resolve the conflict of interest, a 42nd clone is created to investigate the case.   Well done…  –  David Edmiston

This is an easy read due to the subtle humor, excellent story telling and, while this is sci-fi, it doesn’t rely on future technology to move the story along. Bernheimer has created a very believable and well thought out world with a unique social structure.  –  By C.F. Hill, Amazon Hall of Fame and Top 10 Reviewer

And here, in the comfort of your own browser, is your free sample of Prime Suspects by Jim Bernheimer:

Featuring newly freebified titles by Agatha Christie and past Kindle Nation sponsors like Jacqueline Lynch, David McAfee and Jason Letts, and powered by our magical Kindle free book tool, here are this morning’s latest additions to our 1,080+ Kindle Free Book listings….
But first, a word from … Today’s Sponsor
“Being a supervillain means never having to say you’re sorry … Unless it’s to the judge or the parole board.” 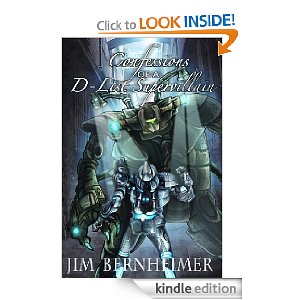 Confessions of a D-List Supervillain

“Picture a world with characters like the ones from The Incredibles or Megamind, except instead of a cheesy cartoon, imagine these characters really
exist and this is what the world is really like. That’s the world that Bernheimer creates, and it really works well.”

“Being a supervillain means never having to say you’re sorry … Unless it’s to the judge or the parole board. Even then, you don’t really have to. It’s not like it’s going to change the outcome or anything.”

Those are the words of Calvin Matthew Stringel, better known as Mechani-Cal. He’s a sarcastic, down on his luck armored villain. Follow his exploits as he gets swept up in a world domination scheme gone wrong and ends up working for this weak willed, mercy loving heroes. Immerse yourself in his epic battles and see what it’s like to be an outsider looking in at a world that few have ever experienced.

Climb into Cal’s battlesuit and join him on his journey. Will he avoid selling out his principles for a paycheck and a pardon? Can he resist the camaraderie of being on a super team? Does he fall prey to the ample charms of the beautiful Olympian Aphrodite? How will he survive the jealous schemes of Ultraweapon, who wears armor so powerful it makes Cal’s look like a museum piece?

See the world of “righteous do-gooders” through the eyes of someone who doesn’t particularly care for them.

And remember – Losing an argument with a group of rioters isn’t a good excuse to start lobbing tear gas indiscriminately at them. You’ve only got so many rounds and it’s going to be a long day, so make sure you get as many as possible with each one.

One Reviewer Notes:
“Jim Bernheimer definitely subscribes to the Alan Moore/Frank Miller school of superheroes, where the line between superhero and supervillain is very thin. But, Bernheimer also clearly understands that the appeal of the superhero lies in the reader finding a relatable (some would say, normal) person who willingly puts themselves in extraordinary circumstances on a regular basis. Bernheimer creates such a character in his protagonist, Calvin Stringel, by both utilizing outstanding dialogue and running Stringel through several superbly paced situations. He even throws in a nice twist at the end, which is perfectly in character for a comic book tale. The result is a well-constructed homage to the superhero/villain idea that keeps the reader engaged and entertained. Confessions of a D-List Supervillain

is required reading for any geek, former geek, or wannabe geek who gets a thrill at the endless possibilities offered by the superhero genre.“
–Michael Lima, Vine Voice
About the Author
I’m 41 years old, married, with two young daughters and live in Chesapeake, Virginia. With Gryphonwood Press, I’ve authored Dead Eye: Pennies for the Ferryman

, and Spirals of Destiny Book One: Rider. My next project for Mr. Wood is Dead Eye 2: The Skinwalker Conspiracies. On my own imprint, EJB, I have published a short story collection and an anthololgy (Horror, Humor, and Heroes Volumes One and Two), as well as the science fiction novel Confessions of a D-List Supervillain

(or a free sample) to your Kindle, iPad, iPhone, iPod Touch, BlackBerry, Android-compatible, PC or Mac and start reading within 60 seconds!
UK CUSTOMERS: Click on the title below to download
Confessions of a D-List Supervillain
Each day’s list is sponsored by one paid title. We encourage you to support our sponsors and thank you for considering them.

Loading
*
*
*For verification purposes only
The beginning of a fantasy trilogy with gods and goddesses, exiled royalty, kingdoms at war, and magic!Eya is a sheltered princess in a small, forgettable country. She spends her days bungling embroidery lessons and wishing she could do more with her life than get married. When the discovery of an...
Read more »

Struggling With the Current (The Telverin Trilogy Book 1)
By: A.R.K. Horton
Added:

Report Bad Listing
*
*
*For verification purposes only
Re-Discover the MeatloafGet your copy of the best and most unique Meatloaf recipes from BookSumo Press!Come take a journey with us into the delights of easy cooking. The point of this cookbook and all our cookbooks is to exemplify the effortless nature of cooking simply. In this book we focus on...
Read more »

Report Bad Listing
*
*
*For verification purposes only
This is an overview of the most offbeat and underrated vampire movies spanning nine decades and 23 countries. Strange Blood encompasses well-known hits as well as obscurities that differ from your standard fang fare by turning genre conventions on their head. Here, vampires come in the form of...
Read more »

Report Bad Listing
*
*
*For verification purposes only
Welcome to Soup Country.Get your copy of the best and most unique Soup recipes from BookSumo Press!Come take a journey with us into the delights of easy cooking. The point of this cookbook and all our cookbooks is to exemplify the effortless nature of cooking simply. In this book we focus on Soup....
Read more »

Report Bad Listing
*
*
*For verification purposes only
●Getting in contact with people brings in lots of opportunities to express oneself. When you manifest well, it catches each one's gaze. Thus, social networking becomes the best way to move forward in your relations, business, as well as careers.Social networking unveils enormous opportunities to...
Read more »

Report Bad Listing
*
*
*For verification purposes only
★ Hacks To Crush PLC Programs From Beginning. Start Designing, Building, Simulating and Testing Programs in IEC Languange (This book guides only on LD (Ladder Diagram)★This book will get you crushing PLC-HMI programming environment as well as familiarize you with (LD) ladder logic...
Read more »

Report Bad Listing
*
*
*For verification purposes only
Do you love the taste of pasta?  Pasta has been a favorite of millions for generations. The simplicity, speed of cooking and sheer variety makes pasta an appealing midweek meal or a dish that can be the centerpiece of a much grander dinner.Inside The Best Pasta Cookbook: 100 Classic Pasta Recipes...
Read more »

Report Bad Listing
*
*
*For verification purposes only
He stole her from the Horde.EronRegha Horde never lingers in one place. They come, they raid, and they leave. I’m counting on that. Because I stole the Omega the Horde raided the house for, and I'm keeping her.KateAbducted, auctioned, then stolen, I will resist for as long as I damn well...
Read more »

Copycat Recipes 2022: This Ultimate Cookbook is Filled with Secret and Easy Recipes from Some of the Most Famous American Restaurants
By: VANCOUVER Press
Added: