By Steve Windwalker
Earlier this week — as we sat around waiting for Amazon to come clean and announce a Kindle tablet — we conducted a little experiment here at Kindle Nation. 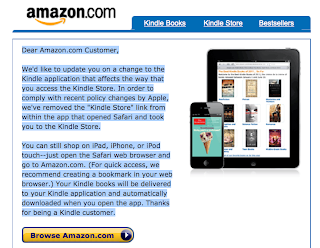 In the midst of considerable internet fanfare, Apple forced a change in the Kindle App for the iPad, the iPhone, and the iPod Touch. Basically, the result is that there’s no longer a link to the Kindle Store within the Kindle App.
Our experiment? We thought we would see what would happen if we didn’t have anything to say about it. More of those kinds of news items appear these days on our BookGorilla.com sister blog anyway, so we didn’t feel we’d be letting you down by staying mum.
Why? Well, this is the kind of “issue” that gets a lot of attention from tech bloggers and partisans who believe the world will soon end in a conflagration ensuing from global thermonuclear war between Apple and Amazon. We were curious to see if the change really mattered much to anyone among the thousands of serious readers who visit Kindle Nation each day.
The results are in. We didn’t receive a single email, blog comment, tweet, or Facebook comment or message about the change. We know that a small but significant percentage of our readers read Kindle books on their iPads and other iOs devices, so it’s actually pretty remarkable that there wasn’t a peep or a tweet.
But now that the dust has settled, or now that the dust continues to just sit there, we’ll briefly review what has happened here.
So it is no surprise that neither Amazon nor the other players would go along with this kind of greedy power play. If there was a surprise, it was
Instead, it seems like Apple is doing all it can to make itself irrelevant to the serious readers who do most of the buying when it comes to ebooks. And Amazon, obviously recognizing that Apple’s power play changed very little, has played its hand in a very calm, understated way. The company sent the following message Wednesday to Kindle customers who have registered an iOs device for Kindle App use:

You can still shop on iPad, iPhone, or iPod touch–just open the Safari web browser and go to Amazon.com. (For quick access, we recommend creating a bookmark in your web browser.) Your Kindle books will be delivered to your Kindle application and automatically downloaded when you open the app. Thanks for being a Kindle customer. 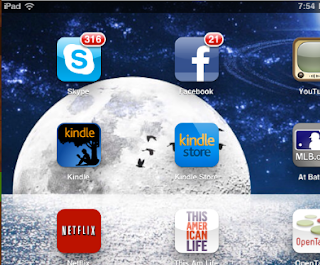 Exactly. But perhaps out of an overabundance of politeness, Amazon didn’t take things one step further. Sure, you can “bookmark” the Kindle Store on your iOs device’s browser. But you can also add the Kindle Store to your iOs Home screen, right alongside your Kindle App, just as you see them in the second row of the screenshot at the right. Here’s how: 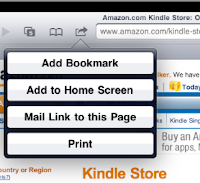 Over at the Atlantic Wire, blogger Rebecca Greenfield’s view of the Apple power play seems well-considered, if a little more glum than ours: “It looks like everyone involved loses something in the e-reader app store battle,” she writes. She says it is “far more inconvenient for iPad users to get reads on their devices,” but I have to admit that I am not feeling her pain. What’s so hard about tapping the Kindle Store icon and buying a book. You’ll seal the deal and arrive back in your Kindle App a few seconds before the new book downloads. Shazam.

But Wired Epicenter’s Tim Carmody concludes that “Apple’s new rules haven’t knee-capped Amazon in the slightest. Far from it. In fact, Apple’s given them a gift….”

Whatever the case, it is certainly hard to imagine that Apple could make any kind of plausible case that their power play was undertaken for the benefit of iPad or other iOs users. And the more of these silly missteps we see from Apple, the more likely it is that ultimately they will begin to drive even some of their own loyal fans off in the direction of some other tablet from some other company, perhaps a company that already has a stake in the ebook business.