“A great price for a fab collection!!” 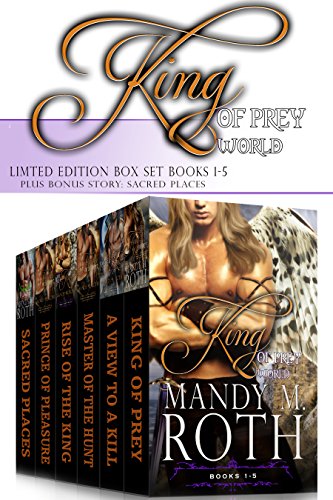 Contains:
King of Prey
A View to a Kill
Master of the Hunt
Rise of the King
Prince of Pleasure
And the bonus story: Sacred Places Druid Book One

In a place where realms combine and portals open passages to the unknown, a prophecy speaks of fertility being restored to his people through the taking of King Kabril’s mate.

The prophecy neglects to mention she lacks something vital to his kind—wings. Kabril, King of the Buteos Regalis has no interest in taking a human mate. His kind believes humans are dirty, vile creatures who rely on machines to lift them into the air. The last place he wants to go in search of his mate is Earth, but he’s left no choice.

Never did he expect to find love on a planet with one moon, people who lack wings and a stubborn vixen who makes his heart soar. When he does, he fears the truth about who and what he truly is will steal it away. Little does he know his enemies fully intend on doing the taking.

A View to a Kill

A trained assassin…a man even the deadliest of warriors fear. To cross him is foolish. To steal his heart is pure madness.

Sachin must make a choice, give up the one woman he knows to be his true mate and let her live in ignorant bliss of what walks among her people, or fight for what’s his, taking it at all costs. A trained assassin…a man even the deadliest of warriors fear. To cross him is foolish. To steal his heart is pure madness.

Master of the Hunt

When the oracle warns Prince Aeson that his future mate is in the human realm and is in great danger, he wastes no time going in search of her. Problem is, he has no idea who he’s looking for. He’s never met her and the oracle couldn’t give him anything more than small clues as to who she is and where she might be.

Rise of the King

Warrior, bastard, outcast, traitor to his kind, these are all labels Lazar has worn for the past several years, since he took a stand against the actions of a mad king. He’s defended the Kingdom of the Hawks even though the blood of the Falcons runs through his veins. He’s bedded their women, drank their mead and protected their king. None of that makes him one of them. An empty pit has been in his stomach for years, believing his true mate perished long ago. When he learns she’s alive, he has to not only win her over, but also make her understand men who can shift into birds aren’t the things of nightmares. They’re real, and he’s one of them.

Youngest born in a family of royal hawk shifters, Rossi is used to dodging responsibility and doing what he wishes. His needs are simple—he likes fighting, and bedding beautiful women. He isn’t looking for a mate, so when his meddlesome sister-in-law decides to divine his future, he’s stunned to find out he’s about to meet her—the one. His mate. And she’s human.

As one who does his best to limit his time in the human realm, Rossi believes there is no chance he’ll cross paths with the woman destiny has in store for him. After all, it’s not as if humans fall from the sky in the realm of bird shifters.

Be sure to check out the following King of Prey Titles:
Prince of Flight (Coming Soon)

“Any fan of Roth take note. I have read all of these book individually, and they are great!!! Now you can get them all together and for an unbelievable price! Hours of great entertainment! A must have!”

“When the men of this other realm come to earth to find their fated mates, what wouldn’t they do to protect them, when the women find their loves are birdmen the stubbornness, and sassy attitudes leave them men in a daze.”