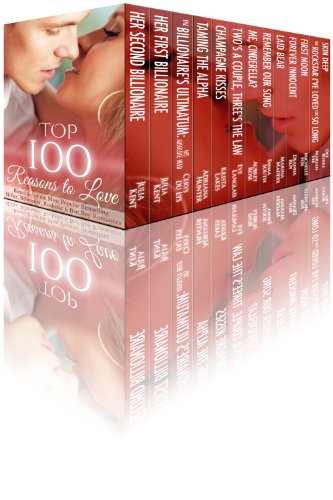 The Best of Amazon’s Top 100 Romances — All in One Boxed Set!

This 12-book boxed set is packed exclusively with Top 100 bestselling romance novels! The collection includes NINE New York Times bestselling authors and ELEVEN from USA Today. The books in this set have received 1200 rave reviews and sold over 350,000 copies on their own.

These books are worth $40, but have been brought together at a very special price for a limited time. Pick up this amazing romance collection before it disappears forever!

What’s Inside (check the “Look Inside” for full blurbs!):

The Billionaire’s Ultimatum: His Absolute Need by Cerys du Lys — Falling in love wasn’t supposed to be a part of Jessika’s temporary job description.

Two’s a Couple, Three’s the Law by Eve Langlais — Bad boy werewolf or suave vampire? Why choose when the law demands she take on two?

Remember Our Song by Emma South — Can the lightning of true love strike twice after amnesia tears the perfect couple apart?

First Moon by Michelle Fox — A curvy beauty feels the bite of the wolf and heeds the call of the wild.

Skin Deep by Dez Burke — A scarred race car driver. A beauty afraid to take a chance. Can their love overcome? 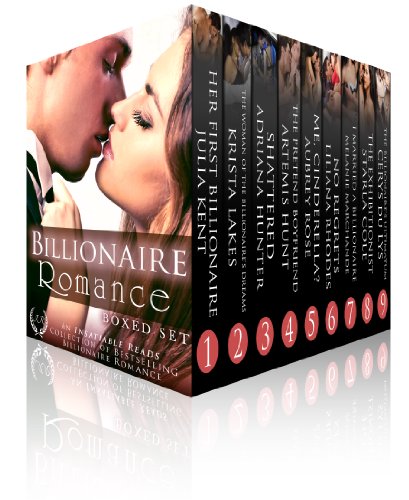 From powerful businessmen to dominating bachelors who won’t take no for an answer, this exclusive Billionaire Romance boxed set includes some of the hottest stories ever published by popular romance authors!

HER FIRST BILLIONAIRE by Julia KentCaught between two men- literally- who turned out to be roommates and secret billionaires, Laura makes a startling discovery about her own capacity for passion.

THE WOMAN OF THE BILLIONAIRE’S DREAMS by Krista Lakes

Tracy has been stepped on all her life, but when a car accident leaves her with the ability to enter other people’s dreams, an opportunity arises. Will Tracy be able to break out of her shell in order to seduce billionaire Paul Hayes?

Curvy Katherine is tired of the daily grind. She craves something new… something exciting. There is one thing that she does look forward to every day- the meetings with her ruggedly handsome billionaire boss, Matt Donaldson. Known for his impossibly good looks and unbelievable wealth, he’s loved by many and hated by many more. Katherine never thought Matt noticed her until he comes to her rescue. That sets the pace for a dangerous game of complete submission.

ME, CINDERELLA? by Aubrey Rose

One kind deed can change your life forever…

Brynn has spent her life trying to forget her desires, and Eliot’s deep wounds have taken nearly a decade to heal. After so much hurt, will either of them be able to open their hearts again?

THE PRETEND BOYFRIEND
by Artemis Hunt

Samantha is clumsy and totally in need of a new boyfriend by this weekend. Her younger sister is getting engaged. Enter Brian Morton. He is gorgeous, rich, snarky, and utterly promiscuous. He was also the bully who made Sam’s middle school life a living hell. A series of bizarre events results in Brian losing a bet. His punishment? To be Sam’s slave for the weekend… and do anything she wants.

NO REGRETS by Liliana Rhodes

Life hasn’t been perfect for plus sized Deborah. Working in a department store isn’t great, but it has its perks and she meets one in the form of a man she calls “Mr. Sexy”. William King isn’t just any man though, he’s an ultra-private billionaire heir. When Will’s mysterious past puts the two lovers in danger, will the truth bring them closer together or finally tear them apart?

I MARRIED A BILLIONAIRE by Melanie Marchande

Maddy has given up on marriage- and men. But when her rich (and sexy) boss Daniel Thorne proposes an arrangement of convenience that would allow him to stay in the country, and Maddy to never work another day in her life, she might get more than she bargained for. By the end of their sham relationship, Maddy finds herself wondering if the money will be enough to repair the cost of a broken heart. But Mr. Thorne may have a secret in store…

THE EXHIBITIONIST by Starla Cole

Falling in love wasn’t part of Jessika’s job description. Nor was being asked by billionaire CEO Asher Landseer to become an egg donor and surrogate for his infertile wife. All Jessika wants to do is help, but is she setting herself up for heartbreak in the process?

“You get 9 different and amazing stories by some pretty amazing authors! And only 99 cents, who can beat that!?!?!AMAZING stories. Must read<3”

“…These books are so amazing funny, loving, sexy and well written. When you want to continue reading after 3 pages into each book what does that tell you. I’m telling you, you will not be disappointed. ” 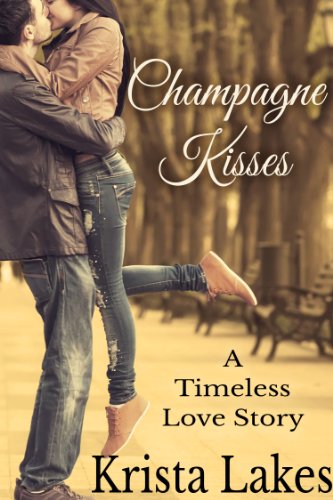 4.7 stars – 63 Reviews
Kindle Price: 99 cents
Text-to-Speech and Lending: Enabled
Don’t have a Kindle? Get yours here.
Here’s the set-up:

In the summer of 1990, Rachel Weber spent a week down on the Florida coast, soaking up the sun’s rays while she waited for her life to begin. It was there that she met Dean Sherman, a handsome, muscular soldier with blue eyes. The two spent a week together full of champagne kisses that only ended when Operation Desert Storm forced Dean to choose between his duty and his love. He chose duty.

Twenty years later, Rachel figured it was just summer love, but she never forgot those eyes. As personal assistant to powerful billionaire Jack Saunders, she never expected Dean to walk into her office after being hired as Jack’s personal bodyguard. Even though she had spent the last two decades trying to forget Dean, she found herself falling for him once again.

When fate forced both Rachel and Dean to choose yet again between love and duty, Rachel had to decide between the man she had always loved and the family that had become her life. She knew she couldn’t have both, but she knew she wouldn’t be happy with just one. Would she choose love, or be forever haunted by the memory of those Champagne Kisses?

This thrilling romance novel brings the cast of the bestselling novels Saltwater Kisses (FREE!) and Rainwater Kisses back for an epic and timeless love story.

5-Star Amazon Reviews
“Another classic by Krista. I was hooked on this series since Saltwater Kisses, and this one surely did not disappoint! This was by far my favorite of the HEA endings, Rachel and Dean just belong to each other.”
“It is always refreshing to me when I read a story about second chances. Champagne Kisses is a redeeming tale of hope and reconciliation amongst lovers, friends, and family members alike. It is my favorite so far in this series and the closest to my heart.”
About The Author

Krista Lakes is a newly turned 30 year old who recently rediscovered her passion for writing. She loves aquatic life and running marathons. She is living happily ever after with her Prince Charming and her bouncing baby boy.

Krista would love to hear from you! Please contact her at Krista.Lakes@gmail.com or friend her on Facebook! 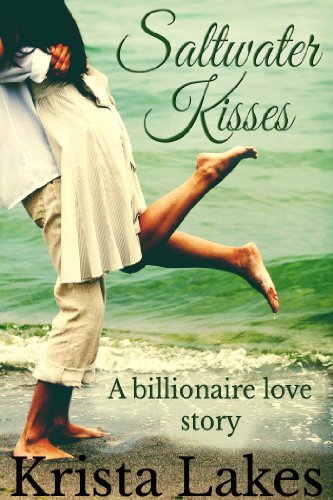 4.3 stars – 66 Reviews
Kindle Price: $2.99
Or currently FREE for Amazon Prime Members Via the Kindle Lending Library
Text-to-Speech and Lending: Enabled
Don’t have a Kindle? Get yours here.
Here’s the set-up:

When small-town girl Emma LaRue won a vacation to an exclusive tropical island, a last minute cancellation meant she would be going by herself. Shy and studious, she never had time to fall in love, and often wondered if she was just meant to be alone. However, that all changed when a handsome stranger literally walked into her life while on the beach and sparks began to fly.

New York’s most eligible billionaire bachelor Jack Saunders thought this vacation would be the perfect escape, one last hurrah, before taking full control of his father’s company. When an innocent Emma didn’t recognize him, he figured that he might get a chance to have a vacation from being rich. He didn’t tell her about the cars, the yacht, or the penthouse. All he did was let her fall in love with him.

Soon, Jack found that he was the one falling in love with Emma. When they enjoy a fantasy marriage ceremony on the beach, they thought it was a bit of harmless fun before returning to their normal lives. A bittersweet goodbye was supposed to be the end of their perfect vacation romance, but when photos of the ceremony were leaked to the press, everything changed.

Feeling lied to and thrust into a world of wealth and privilege, Emma must choose between following her dreams or following her heart. Will she be content at being nothing more than the billionaire’s wife, or will she return to her normal life with only memories of saltwater kisses?

He pushed me back until I bumped against the door. His mouth skimmed my jaw, down to my throat, his teeth grazing my skin and his five-o-clock shadow scratching gently. He pressed a thigh between my legs, sending heat through my belly and then south. I whimpered for more, the noise low in my throat.

“You want to invite me in?” he whispered in my ear. Goosebumps ran down my arms, but not from cold.

“Why? Are you a vampire?” I asked with a wry smile.

He didn’t answer but instead kissed me again, drawing me to him like a magnet. He wrapped his arms around me and pulled on my waist, guiding me through the open door. He released me and I felt woozy on my feet from his kisses. The door thudded softly shut and I licked my lips.

He was perfect in the moonlight. His shoulders were broad, tapering into a tight waist and an ass that my fingers itched to squeeze. The darkness and the wine made me bold, my desire growing by the minute. His eyes caught mine and he smiled, knowing that I was checking him out. Those eyes turned up the flame growing in my belly, now spreading north and south, filling my core with need. The sexual tension wrapped around us like taut guitar strings, filling the room with vibrating desire.

His hands grabbed my hips again, pulling me into him with strong fingers. I wrapped my arms around his shoulders, tangling my fingers in his hair as we stumbled towards the bedroom. A part of me told me that I should stop, that I should think this through, but the other voices in my head quickly drowned her out; I wanted him more than I wanted to breathe.

5-Star Amazon Reviews
“Loved the story. It was sweet, heartfelt and a fun read. Perfect beach reading or rainy day reading. Would recommend!”
“Excellent story was totally enthralled…Loved Emma the whole love story was steamy but in a wholesome way really was digging the characters and the plot.”
About The Author
Krista Lakes is a newly turned 30 year old who recently rediscovered her passion for writing. She loves aquatic life and running marathons. She is living happily ever after with her Prince Charming and her bouncing baby boy.

Krista would love to hear from you! Please contact her at Krista.Lakes@gmail.com or friend her on Facebook!