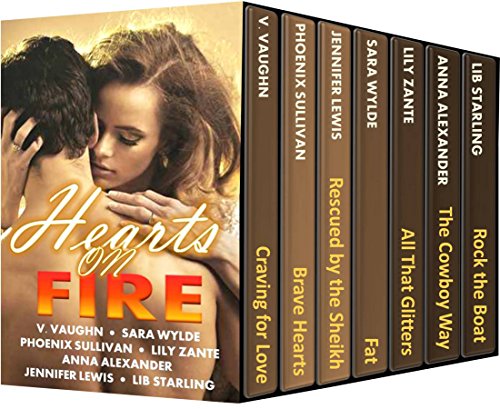 – Learn More
Or currently FREE for Amazon Prime Members Via the Kindle Lending Library
Text-to-Speech: Enabled
Don’t have a Kindle? Get yours here.
Here’s the set-up:

Rescued by the Sheikh – Jennifer Lewis

Film producer Samantha Bechtel has her whole life mapped out like the shooting script of one of her documentaries—but it takes a detour when she breaks down in the desert and is rescued by a commanding and charismatic sheikh.

Nicky has two problems at her new Tanzanian sanctuary: poachers and a pregnant elephant devastated by a terrible loss. Nicky’s new ranger, Peter, ex-special ops, is running from similar pain. Together they must find the family, hope and courage needed to heal their wounded hearts.

Jordan is about ready to give up her charter sailing business when she’s hired to skipper a vacation cruise for Davis, a world-famous rock star. In the close quarters of Jordan’s schooner, their personalities clash… but neither can deny the attraction growing between them. If they can turn hate into love, they’ll find unexpected passion filling their sails.

All that Glitters – Lily Zante

For businesswoman Andrea Brunelli a weekend in Bellagio turns into a sultry summer romance when Riley James, a wealthy and handsome American, catches her eye.
But her nights of passion soon lead to more than she had bargained for when she discovers that there is a price to pay.

Cattle rancher Trey Armstrong loses his memory and wakes to what he thinks is the perfect life. But his sexy wife is hiding secrets, and he soon realizes he’s going to have to remember the past in order to have a future.

That’s nothing Claire Howard hasn’t heard before, and there’s part of her that thinks it’s the worst thing in the world. Even when she has the attentions of two men who are the embodiment of fantasy.

But it’s not their love that matters, it’s her own. Fat is a brand that’s been seared into every aspect of her life—even her heart. Can Claire love herself enough to reach past the labels for her own happiness?

Casey moves to snowy Colorado for a fresh start finding a man that wants a family. She discovers ski instructor, Blaine – a dream come true. But Blaine has a secret that ruins her plans. When Casey’s ex, Jason comes to town she’s faced with the difficult decision between the love of her life and a family.