TOO LITTLE, TOO LATE 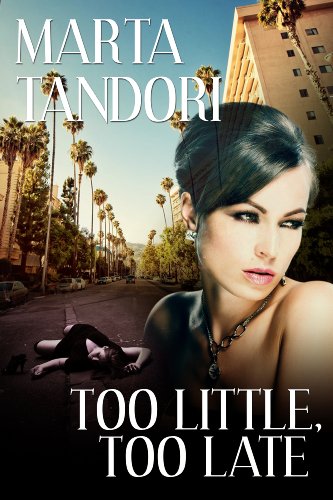 A young runaway takes refuge in a makeshift shack under the Hollywood Freeway, forcing the autistic woman in it to find milk for her sickly newborn – a search that ultimately ends in tragedy when the woman is run down by a hit-and-run driver after a violent confrontation with several teenagers. When one of those teenagers, seventeen-year-old Karen Devane, is implicated in the woman’s homicide, the tabloids are quick to exploit the tragedy, thanks to Karen’s recent antics as a spoiled Tinseltown “celebrat” riding on the coattails of her famous grandmother, the legendary Kate Stanton. Complicating matters is the dead woman’s daughter, who’s determined that Karen be held accountable for her mother’s death, even after the charges against Karen are dropped. With tensions between Karen and her family near breaking point and the paparazzi relentlessly hounding her every move, Karen makes a startling discovery which finally puts her on the road to redemption – and links the dead woman to her beloved grandmother.

Karen’s discovery raises a host of troubling questions for Kate, forcing her to revisit the horrors of her past in search of answers. But Kate soon realizes that some questions are better left unasked after a seemingly random shooting leaves her granddaughter fighting for her life and Kate scrambling to stay one step ahead of a killer who’s determined to end her life in order to save his own.

Marta Tandori was born in the former Yugoslavia, but moved to Canada at a young age. By the time she reached fifth grade, she was an avid reader and writer with a stack of short stories collecting dust in a box under her bed but it wasn’t until she began studying acting in her early twenties at the prestigious American Academy of Dramatic Arts in New York that Marta realized acting wasn’t really her passion – writing fiction was.

At some point after getting married, having two children and working in a busy, downtown Toronto law firm, Marta found the time to take several writing workshops as well as correspondence courses through the Institute of Children’s Literature in Connecticut. She credits the award winning author, Troon Harrison, as the instructor who helped her find her literary voice. Marta’s first work of juvenile fiction, BEING SAM, NO MATTER WHAT was published in 2005, followed by EVERY WHICH WAY BUT KUKU! in 2006. With her more recent endeavors, Marta has shifted her writing focus to “women’s suspense”, a genre she fondly describes as stories having “strong female protagonists with lots of skeletons hidden in their closets and the odd murder or two to complicate their already complicated lives”.

Marta lives in a suburb of Toronto, Canada with her husband, one grown child and a menagerie of faithful family pets where she is currently at work on a new book.

And here, in the comfort of your own browser, is your free sample of the TOO LITTLE, TOO LATE by Maria Tandori: