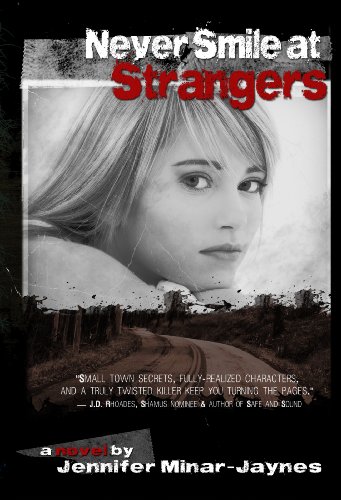 Please note that “Ugly Young Thing,” the second book in the GRAND TRESPASS SERIES will be released on April 2013. If you would like to be notified once it launches, please go to http://www.Facebook.com/NeverSmileatStrangers and hit “Like” or email Jennifer at jenniferjaynes777@gmail.com.

WHEN TEENAGE GIRLS VANISH in what was once considered a safe Louisiana bayou town, the lives of four desperate young locals take unexpected turns, begging the question: Do you ever truly know those closest to you?

Meanwhile, ERICA DUVALL, a reclusive 19-year-old aspiring writer, befriends Haley. Ten years earlier, Erica’s mother abandoned her, leaving her with the womanizing used car salesman father she loathes. She’s decided to write a novel based on Tiffany’s disappearance; a novel that she hopes will lead to a reunion with her estranged novelist mother.

RACHEL ANDERSON, a 36-year-old mother of two, is having trouble coming to terms with her husband’s affair with the missing girl—a relationship that supposedly ended shortly before Tiffany’s disappearance. What’s more, she comes to the realization that someone is watching her family through the large back windows of her house.

A DISTURBED MAN also lives in the area. Ever since his mother’s murder four years earlier, he’s been raising his insolent teenage sister, ALLIE, who sleeps with truck drivers for money. He considers women to be dangerous—and his world revolves around his fear and hatred for them. He’s terrified of his sister, knowing she’s intent on pushing him over the edge.

PRAISE FOR “NEVER SMILE AT STRANGERS”

“Jennifer Minar-Jaynes’ debut novel Never Smile at Strangers is a gritty, atmospheric Southern thriller that keeps the heat and the tension cranked high right to the end. Small town secrets, fully-realized characters, and a truly twisted killer keep you turning the pages. Minar-Jaynes has an unerring instinct for the perfect detail that draws you in and won’t turn you loose.”

“Never Smile at Strangers is an irresistible debut packed with surprises. Her set-up is riveting, the plot loaded with twists and turns that leads into an effective and logical conclusion. Add this to prose that is fresh, interesting, and innovative, and you have one of the best debut novels that’s sure to please readers for years to come.”

— Michael Laimo, author of Dead Souls
and Deep In The Darkness

“Solid, effective throughout. Dark emotions ranging from grief and loneliness to insanity are vividly brought to life with entirely believable insight… immediately sucks us in, sustains the suspense and keepers the reader involved. . .”

—David Angsten, author of Dark Gold and Night of the Furies

“Jennifer Minar-Jaynes is a welcome addition to the family of thriller writers.”

Since graduating from Old Dominion University with a B.S. in Health Sciences and a minor in Management, Jennifer Minar-Jaynes has made her living as a content manager, webmaster, news publisher, editor and copywriter.

In ’04, Jennifer founded www.WritersBreak.com, which became widely recognized in the writing world and went on to be named a ‘best website for writers’ by “Writer’s Digest” magazine.

After moving from Washington, D.C. to Los Angeles in ’05, Jennifer quickly traded in her conservative business suits for jeans and t-shirts and added screenwriting and freelance writing to her repertoire.

In 2010, she gave birth to two beautiful boys, Christopher & Ryan. Christopher has a congenital heart condition called hypoplastic left-heart syndrome, a CHD that she plans to write about in the near future.

In 2011, she published NEVER SMILE AT STRANGERS, which quickly rose through Amazon’s ranks and has made several bestsellers lists. Its sequel, UGLY YOUNG THING, will be published in April 2013.

And here, in the comfort of your own browser, is your free sample of NEVER SMILE AT STRANGERS by Jennifer Minar-Jaynes: